Skip to content
You are here
Home > Tennis > 2018 Wimbledon, Fourth Round: Preview and Betting Advice – Nadal vs De Minaur 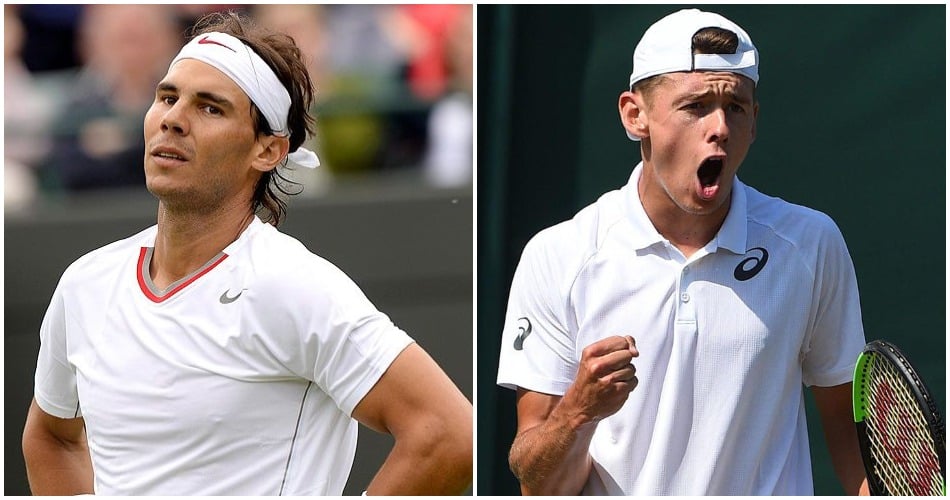 This article is going to explain why Alex De Minaur will notch the biggest win of his career on Saturday.

I ain’t got time to be Shakespeare unfortunately, so I’m just gonna get straight to the point and articulate it direct. Hopefully it hits every reader into placing this absolute must-bet.

Let me tell you that there are only five guys out there who can defend & flip the script in the rally on their backhand wing, BETTER than Australia’s Alex De Minaur

What do they all have in common? 😙

Exactly. They’ve all beaten Nadal. See if you have a solid serve, with a backhand forged in steel and can move well laterally on the given surface, all with the aid of determination, belief and composure, you can beat Rafael Nadal on anything but clay. These guys have shown it.

From the guys that have beaten Nadal, only Murray can contest De Minaur in-terms of movement on a grass court.

And I predicted Brown, Kyrgios and Muller.

De Minaur adds his name … Nadal cannot beat good players on grass in the first week of Wimbledon. The courts are too fast in week one. Still green and he’s just too much of an explosive mover for lawn tennis.

For me Alex De Minaur is essentially a taller version of his idol and now coach; Lleyton Hewitt. Major difference is he has longer strides/reach to work from. (An extra edge) Bigger serve than Lleyton, but much like him possesses those useful all-court skills which prove so beneficial on the grass. Knows how to chip and charge, hit lobs, use variety etc etc. Loves the ball coming onto his racquet. Lunges well. Hits balls amazingly well on the run. Sick at net so in the context of this matchup can come in and close off rallies when he has Nadal on the lunging run and out attempting to hack balls back into court in effort to reset the point.

Listen, the only way Nadal wins is if the kid chokes. We know Nadal is the GOAT at enticing players into chokes. We know he capitalises on them the most out of any player, but are we really going to turn this down on the basis Alex could choke? NAHHHHHHHHHHHHH! What am I about to say? Fuck outta here! Listen we can trade/hedge (Cashout) anyway when Alex is near the finish line for around 80% the max profit. Look at these odds? Still a sexy win.

Nadal will be rushed in preparation for his lasso topspin forehand with how De Minaur’s flat strokes penetrate through the grass, skidding fast and low. This will draw errors, shortballs, etc etc and what not. It will all just be too much for the Spaniard. He won’t have any rhythm . He’s a rhythm dependent, one dimensional, lefty moonballing hack and for the 7th year running, ain’t getting anywhere near the second week of SW19. This is done.

Have you witnessed De Minaur’s return of serve? Backhand return of serve? Completely nullifies Nadal’s lefty slider out wide on the AD and down the T on the Deuce. He gets to the return early and hits it back flat, hard and deep. Nadal will be jammed/yorked and flapping about all over the clumsy place with his lasso forehand. There’s just so much shit I can list for why this is THE PERFECT STORM FOR PLAY OF THE YEAR. 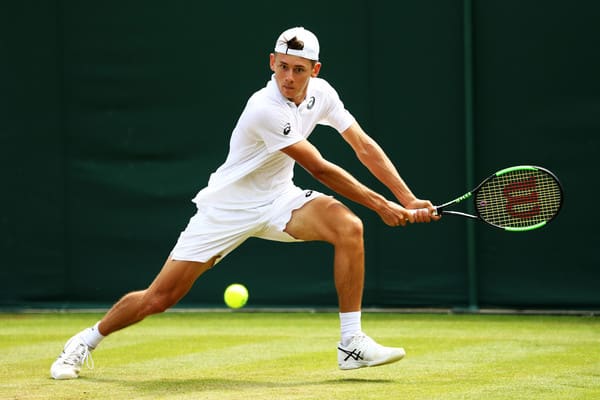 How many times have I cashed in off the After Shave brand that is Nadal, huh? Exactly, countless times. I called Kyrgios to beat him here in 2014. I called Dustin Brown to beat him in 2015. I called Muller to beat him last year. I called Goffin to beat him at the World Tour Finals

Of course there will be the usual boring media inquests and uproar into why Nadal once again flops on grass. The usual shock I always cringe at. The ignorance pisses me off. I can’t deal with it. People see the biceps and refuse to ever see it happening. All I’m saying to you guys right, is don’t be one of those people?! Hey?

Alex De Minaur should definitely be taking 2 sets off Nadal and if he doesn’t bottle and choke it, letting Nadal back in, he’ll win.

Once he takes the first set, remove half of your stake by laying Nadal at around 2.50. Once De Minaur breaks in the second set, remove your entire stake by laying Nadal at 1.50. If it goes to 1 set all, wait for De Minaur to break serve and then look to remove your entire stake there at around 1.40. Completely hedge/trade at around 1.20. Of course this is being greedy and if you’d rather do so when Alex is 3.00/4.00 after a break in the first set, be my guest. I know for a fact I am cashing in however.

Not an inplay trader & prefer to use a bookmaker & just bet on the result then the bets I recommend to you are:

2 thoughts on “2018 Wimbledon, Fourth Round: Preview and Betting Advice – Nadal vs De Minaur”