Brazil has won a record five World Cups but have failed to capture the big one on home soil. This will be the first time they have hosted a World Cup since 1950, where they came just short of Uruguay.

Their 1970 world cup squad is considered one of the greatest and some of the very best, including the likes of Pele and Ronaldo, have played for Brazil. They are one of a kind and I will show you three reasons they will win the 2014 FIFA world cup.

Being in your home country helps in a World Cup hugely (unless you are South Africa) and although Brazil failed to capture the trophy last time the competition was in their homeland another South American team did.

Brazil will more than likely top their group and if they do either Spain or Holland is waiting (or Australia or Chile). The Dutch squad made the final last time but in this tournament they are without their (former) captain Giovanni Van Bronckhorst.

Moreover, their veteran and midfield maestro Rafael Van De Vaart will not be there and Robin Van Persie, their star man, is a doubt with a knee injury although he has brushed away speculation that he will not make it.

Also their manager Louis Van Gaal has expressed his desire to join Manchester United; it can’t be good for your psychological state knowing your manager is ready to pack his bags. As for Spain they were demolished in last year’s confederation cup against Brazil in a 3-0 loss. Brazil has that big game feel heading into this tournament.

Yeah sure their squad isn’t the ‘70 squad, they don’t have Pele or Ronaldo but they have arguably one of the top five best players on earth in Neymar.

In 131 games the Brazil strikers (Neymar, Hulk, Fred and Jo) have 62 goals between them and half of those are from Neymar. The stage is set for the young star.

Their midfield contains players such as Willian who can run with the ball and whip a cross in and they have players like Fernandinho and Paulinho who can hold the midfield, make good long balls and occasionally score.

Over half of their midfield men play for English clubs which is good for them as they could end up against England in the quarter finals.

In their defence they have an all-star centre back selection which includes their captain Thiago Silva, David Luiz who is leaving Chelsea for 40 million and the reserve in Dante who is a first choice in Bayern Munich.

They have full backs with blistering pace they never seize to amaze with their skills and impossible angle goals. To cap it all, in-goal they have one of the best, Julio Cesar, who has won numerous trophies around the world despite being second best for QPR. 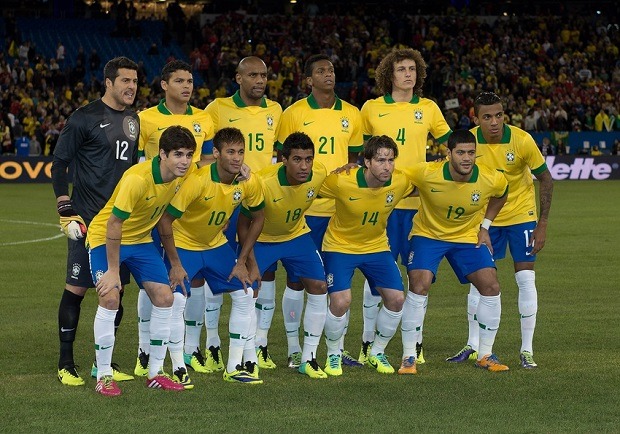