The Hong Kong Sevens is underway, heading into the finals on Sunday. The world’s greatest annual rugby event is celebrating its 40th anniversary, so here’s five of its best finals.

The first of the Fiji-New Zealand classics, starring Waisale Serevi and Eric Rush, HK7’s biggest stars. New Zealand went up 10-0 with tries by Dallas Seymour, from a breakout on their own tryline, and Rush, who beat off two tacklers. Fiji replied just before halftime, Serevi throwing a huge one-handed pass to an unmarked Noa Nadruku. After the break, Fiji replied with one of HK7’s greatest tries. Alifereti Dere, the Fiji captain then and coach now, made a try-saving tackle on John Gallagher, forcing a lineout deep in their 22.

Vesito Rauluni burst off the lineout he threw into, and with defenders rushing up, threw one-handed to Serevi. Serevi flicked on before he was flattened. In one motion, Nadruku took the ball and passed it between his legs to Tomasi Cama.

Cama had the overlap from 80 metres out, beat Gallagher for pace, and finished between the posts. Serevi’s conversion gave

Fiji the lead for the first time at 12-10. Fiji finished with a 60-metre try capped by Nadruku, and a last by Wesake Rasari, where the Kiwis were smashed back in tackles. The HK7s trophy was back in Fiji hands after six years.

Fiji rushed to 8-0 thanks to a turnover inside the New Zealand half, and superb support play. From the restart, Eric Rush caught the ball on the bounce when it had barely gone 10 metres, weaved for 30, and sent in Scott Pierce to leave the Kiwis, with the conversion, two behind at halftime.

Pierce scored his second to give New Zealand the lead by two, but Fiji grabbed it back when Serevi, unable to spy a hole outside the 22, chipped over the New Zealanders, regathered, scored, and converted for 14-10. Pat Lam dived in wide out on the left to tie the score, and Fiji, again, had the last say in injury time from a scrum on halfway.

The ball went through seven pairs of hands, ending in Timoci Wainiqolo’s, and he needed all of his considerable height to reach out over a tackle and score the winning try.

“It was an incredible final, but sickening to lose.”

Tom Varndell scored the opening try for England, and Fiji came back through Jone Daunivucu, who broke Ben Russell’s tackle and slipped Simon Amor. Epeli Dranivasa was sin-binned, and England pounced with a Ben Gollings try. Mathew Tait added another for England to lead 19-7 at halftime.

Within three minutes of the second half, Fiji tied the score. Dranivasa made up for his yellow card with a try, Semisi Naevo walked in in the left corner, then regained the kickoff to help substitute William Ryder, with his first touch, race into the right corner. At 24-19, Fiji player-coach Waisale Serevi just to hold the ball and play out time.

Then captain Jone Daunivucu took off from his 22 down the left touch, passed halfway, and attempted a pass inside which was knocked down.

Tait kept it safe, Henry Paul surged into the Fiji half, David Strettle wrestled the ball past three defenders into the 22, and Gollings ranged up unmarked to take the pass off the ruck and score left of the posts. His easy conversion ensured England won a fourth straight HK7s.

“I was in the right place at the right time,” he said.

Cakau put Fiji back in front with a try from a quick tap penalty, then, with four minutes to go, Jackman was sin-binned for taking the legs out from a lineout jumper. Matawalu scored after two great passes off the floor by Fiji.

Bryce Heem replied when New Zealand broke from its tryline with a minute to go, but Nayacalevu finished a pulsating final with a gallop straight through the New Zealand line from the kickoff.

Wales, in its first HK7s final, made a blistering start, and led 19-0 at halftime. Cory Allen scored in the first minute, the first of his brace, and Alex Webber also crossed to put Wales on the verge of more history. With a minute left in the half, Fiji’s Ilai Tinai tip-tackled Lee Williams on his head, and should have been issued a red card instead of yellow. It took Fiji 3 ½ minutes to tie the score.

Halftime substitute Osea Kolinisau went over with an overlap on the left, then from a scrum tighthead on halfway, stepped past one defender, was too fast for a second, and wrong-footed a third to score his second. Fiji claimed the kickoff, and Samisoni Viriviri flew into the right corner.

With two minutes left, Fiji quick-tapped a penalty in its 22, and Kolinisau ran off a switch on halfway to split the Welsh and score between the posts. The thrilling end was missed by TV viewers in Hong Kong, however, because the broadcaster switched to the news. 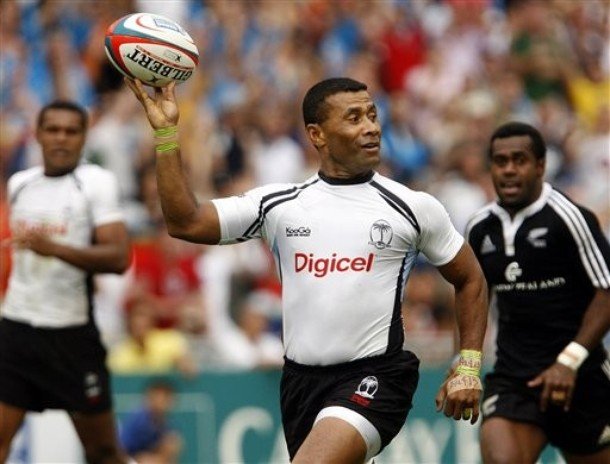