It was as if they’d set out to prove every “jock” stereotype true. To prove that the only reason that any repercussions are dished out for any action in sports is to save face with the Jerry Sandusky scandal

On Monday, September 8th, the NCAA spit in the face of the victims of the Jerry Sandusky sex abuse scandal when they dropped all remaining sanctions against the Penn State Nittany Lions football team two years early.

The timing couldn’t have been bolder with Jerry Sandusky, nor more disgraceful. At the end of the college football day Saturday, the B1G was already all but out of the newly implemented college football playoffs following crippling early season losses by three of its marquee teams. Two days later the undefeated Nittany Lions, the only team left in the B1G that could realistically make the “Final Four”, had their post season ban lifted and their scholarship allowance restored to 100 percent.

The move by the NCAA contradicted the very words of its president Mark Emmert who said “Our goal is not to be just punitive, but to make sure the university establishes an athletic culture and daily mindset in which football will never again be placed ahead of educating, nurturing and protecting young people.”

Football will never be placed ahead of educating, nurturing and protecting young people? How about profit?

Will that be placed ahead of educating, nurturing and protecting young people? I’d say it has been.

The word “culture” is important and it’s a word that the NCAA stressed from their high horse as they passed down the original sanctions to Penn State in 2012. There is a “culture” in sports in the United States in which athletes, staff, and entire organizations are not held accountable for their actions.

In 2012, an Ohio teen and member of the local high school football team was convicted of the rape of an incapacitated 16 year old girl after she passed out from drinking at a party. He was also convicted of taking and sending nude photos of the victim. This fall, the tier two sex offender re-joined his high school’s football team upon his release from a juvenile detention center.

In reference to the case, tennis star Serena Williams said that the victim “Shouldn’t have put herself in that position.”

Serena Williams was not the only one who blamed the victim. When the Ohio story went public many voiced similar opinions locally and nationwide, some even saying that it was not only the victims fault, but that she “deserved it”.

The sports culture in the United States has been and continues to be dangerous. Particularly when it comes to sexual abuse by staff and athletes. When abuse is reported, no one wants to believe it. They don’t care. They care about their team, their conference, and their organization. They blame the victims, they discredit victims, they intimidate the victim’s and they belittle the victims.

After the sanctions were dropped Monday, Michigan State Spartans football coach Mark Dantonio said “it intensifies it and I think it’s good for the Big Ten and it’s good for our division and it just strengthens it.” People don’t care about victims, about pain, about suffering. They care about wins. Wins, prestige and dollar signs.

The NCAA clearly doesn’t have a code of ethics, but it certainly has a business model and that business model clearly involves Penn State University and the B1G conference. Congratulations Penn State, you’re in the running. 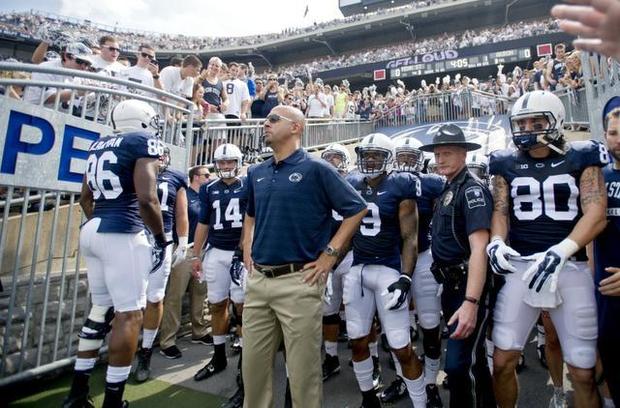