It is that time again, the time where we all go away from our daily stresses, sit down and watch what we all love….Football.

And this round in the Australian A-league will prove to be very intriguing for all fans. The A-league has had two cracking rounds of football and this round seems no different.

With the round opening with defending Champions Brisbane Roar taking on Sydney FC this Friday night, all eyes however will be on Melbournes’ Etihad stadium for another Melbourne Derby with a new look City side taking on the title favourites in the form of Kevin Muscats Melbourne Victory.

Then on Sunday Wellington host the Jets in a crucial match at Westpac, and finally it’s a top of the table clash between Adelaide United and Perth Glory. However Wednesdays match with the Mariners taking on the Western Sydney Wanderers will not be previewed due to the Wanderers Asian Champions League final against Saudi side Al Hilal

The current rankings are as followed: (Teams in bold are in finals positions)

The defending champions Brisbane Roar have had a shocking start to the season, having lost to Adelaide United in the first round in front of their home fans 1-2 and then going on again to lose to surprising top-of-the-table Perth Glory 3-2 in a thrilling encounter at Nib stadium. Mike Mulvey and his men need a great result against equal 2nd Place Sydney FC to bounce back and get their title defence truly underway.

ALSO READ:  What does success look like for Tottenham?
Brisbane and Perth player lining up for a corner kick

Sydney FC on the other hand are euphoric after a classic victory over crosstown rivals Western Sydney Wanderers. After being 2-0 down after the 24th minute the Sky Blues came back to win the game 3-2 and send their fans wild. However after a FFA cup loss to Adelaide united 3-1 due to a very questionable red card to defender Nikola Petkovic, Petkovic will now miss the trip to Brisbane and he will surely be missed. Sydney need a win to stay in the 1st place race, with a win potentially putting Sydney in top spot if other results go their way.

This edition of the Melbourne derby is guaranteed to be an epic. The Victory are in good form after 2 games, winning their first by thumping the Western Sydney Wanderers 4-1 at home and then drawing with in form Adelaide United 1-1. The Victory boast the attacking prowess of Besart Berisha, Gui Finkler and Archie Thompson, their defence has also been solid with frenchmen and Bundesliga winner Matthieu Delpierre fitting in well for the Victory. The title favourites under club legend Kevin Muscat are picked by the bookies for the win but Melbourne City will surely wont go down without a fight.

Melbourne City have had an incredible amount of expectation put upon them this season, after the formally know Heart were bought by Manchester City and recruitment going incredibly well with the likes of David Villa, Damien Duff and Aaron Mooy. City will want to end their winless start against their biggest rivals. After New York City loanee David Villa announcing his departure from Melbourne due to family reasons after round 4, City really need to prove that even without Villa that they can still contest with the rest of the league and to not bring back the disappointment that came from the Heart.

Wellington Phoenix have had a cloud over their head with crowd figures being a worrying factor for the New Zealand based clubs future. There are speculations of a possible license dispute due to the FFA giving them a license until 2016, however this does not seem as a possibility as the New Zealand market is too big to ignore as well as the Phoenix reaching a new membership record. However this is not about the financials it’s about the football, the phoenix are riding high after a 2-1 win over the Central Coast Mariners at Gosford with former mariner star Michael McGlinchey scoring a goal that really rubbed salt into the wounds of the Yellow Army. The Phoenix are rising from the ashes off that impressive victory and will be looking to make it 2 wins from 2 when they take on the Jets

Newcastle are currently sitting in 8th with a loss to the Mariners and a draw to Melbourne city on the road. The Jets faithful have to be patient for a home game as their home ground is being resurfaced in preparation for the Asian Cup in January, and as a result the Jets will have 2 consecutive away matches before returning to Hunter Stadium. Newcastle were unlucky to get a point against the Mariners in round one as well as being hard done by City with a great David Villa strike. The Jets have looked very promising and once Argentinian recruits Marcos Flores and Jeronimo Neumann start firing the Jets will surely be flying high. Both teams need a win to bring optimism to each club and get their fans cheering.

It’s 1st v 2nd in the Hyundai A-league with top of the table Perth Glory travelling to equal 2nd place Adelaide to face the spanish flair of Josep Gombaus’ side. Adelaide United have made big statements already this season and are looking to continue their impressive form against the leaders Perth. With Bruce Djite in hot form and Sergio Cirio offering plenty in attack, United will go all out to ensure that the Reds cement a spot at the top. With a FFA cup victory against Sydney FC on Tuesday, United are looking very impressive and a victory against the Glory could see them as a title contender so early into the season.

When someone said Glory did not have the ability to compete with the leagues best, they were surely proven wrong with impressive, exciting and pulsating victories against the Wellington Phoenix and champions Brisbane Roar. Andy Keogh is surely being tipped as the golden boot winner for this season and the Irish international has bagged in 4 goals in 2 games including a hat trick in last weeks game. A goal scoring war between him and Besart Berisha would be a feast for the eyes if both hold consistency throughout the season. “Handy Andy” is surrounded by experienced players with Mitch Nichols, Youseff Hersi, Richard Garcia and captain Micheal Twaite to create a strong roster with massive potential. Is glory finally coming to the countries West? or will Adelaide prove to good for the boys in purple

Andy Keogh celebrating after scoring in last weeks game, he has scored 4 goals in 2 games

This week in the A-league is guaranteed to bring the passion, action, skill, and flair that will come in the form of 4 games over the weekend and don’t forget the Western Sydney Wanderers going for glory in the ACL final. 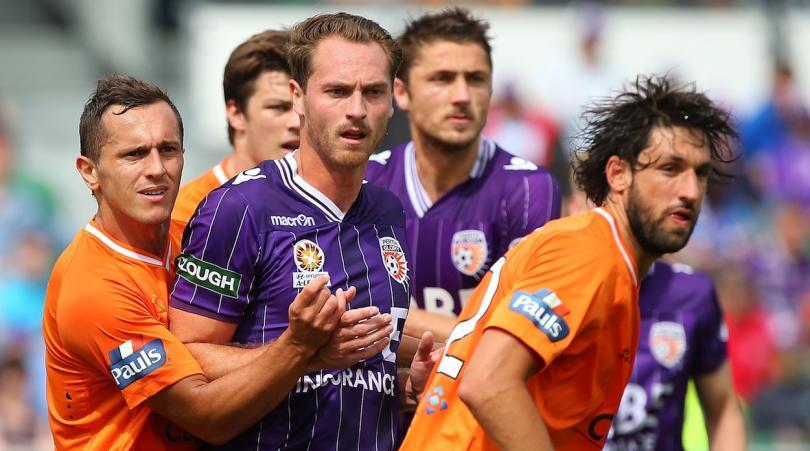