Aaron Rodgers dropped back to pass on first down. To his right, he saw a wide open Jordy Nelson. He hit Nelson in stride, who juked a few Carolina defenders and scored a touchdown. It was flawless, much like Green Bay’s entire game.

Rodgers threw for three touchdowns for the fourth game in a row and the Packers easily handled the Carolina Panthers 38-17.

By the end of the first quarter, it was practically already over. Green Bay scored on their first three possessions with ease. Their defense, usually the weak link, held Carolina to a total of five yards on offense and the score was 21-0 when the second quarter began.

To make the score a little less embarrassing, Carolina was able to score two garbage-time touchdowns that made the final score 38-17.

It was a near perfect game for Green Bay on both sides of the ball, while Carolina could do nothing right all day.

Meanwhile, the Green Bay defense harassed Cam Newton and forced him to make bad decisions all game long. He threw for 205 yards and one touchdown, but had a bad interception on a pass that was well overthrown. He also had an interception in the first quarter that was returned for a touchdown, but it was negated due to a pass interference call on Green Bay. After a strong performance on the ground last week, he ran the ball only seven times for 41 yards.

On defense, Carolina played awfully yet again. They could not keep up with Green Bay’s receivers. They also could not stop the running backs, who combined for 122 yards and two touchdowns. They continuously committed bone-headed penalties that gave Green Bay even more yards and first downs. Even Luke Kuechly, the reigning Defensive Player of the Year, had a bad game.

In the third quarter, Kuechly was ejected after making contact with an official who restrained him after a play in which he appeared to be held. Kuechly claimed after the game that he was unaware it was a referee that he had made contact with. The tape reveals that to be true, as Kuechly did not look at the official until after he had walked away.

Carolina falls to 3-3-1 now and looks ahead to another tough game: a home matchup against the defending Super Bowl champions, the Seattle Seahawks, who are coming off a surprising loss to the St. Louis Rams. Despite this record, the Panthers still hold the first place spot in the NFC South.

Green Bay rises to 5-2 and is tied with the Detriot Lions for first place in the NFC North. They will head to New Orleans to face the disappointing Saints, who lost in the final minutes against the Lions. 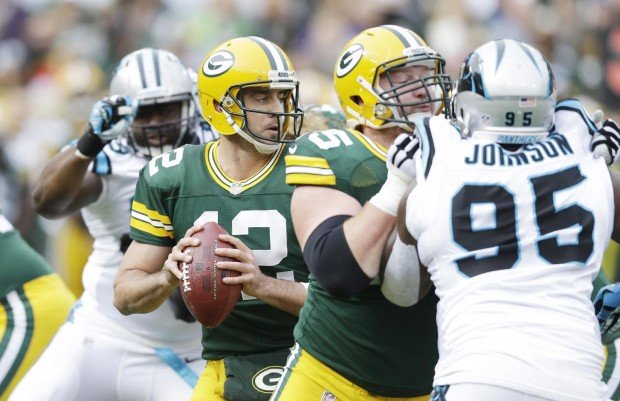