Rehan Ahmed, England’s youngest-ever Test debutant, tore through Pakistan’s batting on the third day of the final Test in Karachi. Ahmed’s 5-48 made him the youngest man to take a five-wicket haul on Test debut as the tourists bowled Pakistan out for 216, helping England close in on a victory that would seal a historic whitewash. It was a stunning performance from Ahmed in just his fourth first-class match, beguiling the Pakistani batters in a bewitching spell either side of tea. Ahmed even appeared as a “Nighthawk” later in the day as England audaciously threatened to chase their target of 167 before the close of the play. Eventually, England’s effort was curtailed by the rapidly fading light, and they will have to return tomorrow, requiring another 55 runs for a famous win.

Initially, it looked like it was going to be Ahmed’s spin partner Jack Leach who would steal all the plaudits, taking the first three wickets to fall and creating the possibility of a three-day finish. Pakistan had edged into the lead when Leach bowled both Shan Masood and Azhar Ali in the same over, Masood missing an extravagant reverse sweep, Ali beaten by a genuine snorter. It was a sad finish to a distinguished Test career for Ali, who received a guard of honour from his teammates as he left the field. Leach had another wicket in his next over, removing Abdullah Shafique LBW and placing England firmly in control, with Pakistan 54-3. It was Leach’s 46th wicket of the calendar year, and it took him back above Australia’s Nathan Lyon as the leading Test wicket-taker of the year.

Babar Azam and Saud Shakeel have been Pakistan’s most consistent batters throughout the series, and they built a partnership that briefly worried England. Babar played with rare caution; it was a captain’s knock, disciplined and responsible but still punctuated with moments of class, playing some beautiful shots off England’s seamers in particular. Shakeel continued a fine series with another excellent innings, skipping down the pitch several times to dispatch Leach back over his head while showing the dogged defence he displayed so effectively in Multan. The pair added 110 for the fourth wicket as Pakistan started to build a potentially challenging lead.

ALSO READ:  Azhar Ali, a retiring Pakistani batsman, comments on his career’s highs and lows and worries that he may never play a Test at home

It took Ben Stokes until the 42nd over to introduce Ahmed to the attack, but he made it worth the wait as he orchestrated another Pakistani batting collapse. There was a hint of fortune about his first wicket, Babar Azam slapping a long hop straight to Ollie Pope at mid-wicket, who did well to cling on. Mohammad Rizwan edged one through to Ben Foakes shortly after, while Shakeel top-edged a sweep to Leach at fine leg. Joe Root then got in on the act, Faheem Ashraf edging an ambitious drive through to Foakes, leaving the hosts 178-7 and staring down the barrel of another defeat.

Salman Agha and Nauman Ali resisted for a short while until Mark Wood trapped the latter LBW, a rare wicket for one of the seamers in a match dominated by spin. Ahmed then wrapped up the last two wickets as Pakistan were all out for 216, leaving England 167 to win, an eerily similar target to what they chased in the darkness twenty-two years ago. It was a match-winning performance from Ahmed, turning the game back in England’s favour as Pakistan lost seven wickets for 52 runs. Ahmed’s control of length was impeccable, though, ironically, one of his few short deliveries provided the wicket England needed most! There is a mesmeric quality to watching Ahmed bowl, and the Pakistan batters sometimes seemed a little bewitched.

In the past, England may have stumbled and stuttered over such a modest target, but Zak Crawley and Ben Duckett quickly allayed any fears, setting off at a canter and quickly destroying any faint Pakistani hopes. As the pair flew past the fifty mark, the possibility of a three-day finish and an early Christmas seemed distinctly possible. Crawley eventually fell for a run-a-ball 41, England’s openers adding 87 in 11.3 overs, halving the deficit. Rehan Ahmed came in as the Nighthawk and promptly dispatched his first delivery for four before being bowled shortly after. Ben Stokes promoted himself up the order as England desperately tried to beat the rapidly fading light. However, it was not to be, and England will have to wait until tomorrow to wrap up a famous victory. 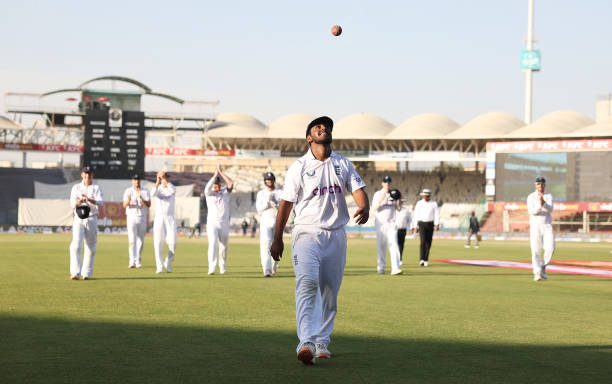