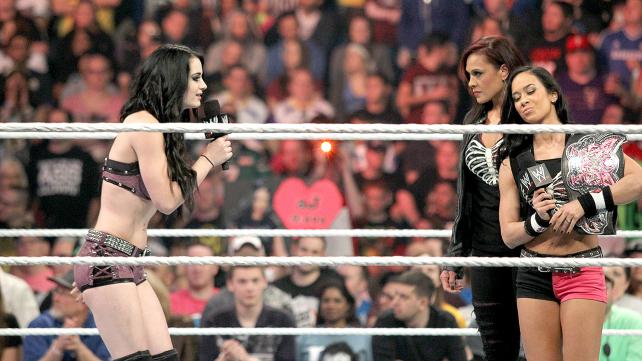 Now that AJ is back, it’s safe to assume that she headed for a feud with Paige and her return to the divas division is exactly what’s needed to finally make Paige interesting.

Since Paige’s debut on the main roster WWE has handled her push all wrong! WRONG, WRONG, WRONG!

They decided to push her as an underdog which allowed for irrelevant divas such as Alicia Fox and Aksana to come across as stronger than her.

The fact that Paige has made to look like she can barely handle her own against divas of that calibre along with her character has made her so uninteresting that it’s upsetting. Paige hasn’t translated from NXT to the main roster very well.

In NXT she was portrayed as such a dominant diva that even the likes of Natalya came up short against her and this was the dominance that made people excited to see her on the main roster.

Paige went from being a standout anti-diva to just another faceless diva that was able to remain relevant thanks to the title in her possession.

WWE have the chance to rectify that mistake and it seems like they’ve started doing so as evidenced by her heel attitude towards AJ on Monday night Raw.

If WWE give this feud the same amount of time that they gave the feud between AJ and Kaitlyn along with a heel turn from Paige as well as having AJ handle most of the talking then fans may see some much needed life inserted into Paige, as well as an interesting divas feud which the division desperately needs.