Alexander Zverev, the man who ended world no. 1 Novak Djokovic’s hopes of a Golden Slam, produced a scintillating performance to outclass ROC’s Karen Khachanov in the men’s singles final at Tokyo 2020. The world no. 5 didn’t drop his serve once as he stormed to a straight-sets win 6-3, 6-1, to become the first German male tennis player to win the Olympic singles gold.

24-year-old Zverev has long been touted as the Next Gen player most likely to break the big three hegemony and he showed just why as he displayed a full array of skills to dominate the encounter, winning in just one hour and 19 minutes.

Alexander Zverev has yet to win a Grand Slam and has struggled with inconsistent serving, an unreliable forehand and a passive mentality. However, at the Ariake Tennis Park on Sunday, Zverev maintained an aggressive approach and his serve was impregnable. He managed an excellent first-serve percentage of 69%, hitting six aces and no double faults – which has been his Achilles heel in the past. He only faced one breakpoint – in the fifth game of the first set – which he saved with a big serve, and was never threatened again.

Even his weaker forehand was firing as he hit more winners on that wing than his backhand at 9-7, with 22 winners overall and only 15 unforced errors. He also approached the net 14 times, almost twice as much as his opponent, winning 86% of the points.

Khachanov, world-ranked 25, possesses a more limited game dependent on a big serve and big forehand. He had no answer to Alexander Zverev’s aggression and consistency of both sides, which pushed him behind the baseline, giving Zverev an advantage in the longer rallies.

Additionally, Zverev’s defensive play was also evident with his 6 ft 6-inch frame aiding him to retrieve difficult balls and force Khachanov to hit one more shot, and the fourth seed was able to elicit 27 forced errors from his Russian opponent.

Alexander Zverev imposed his authority on the match from the start with a forehand winner helping to earn a breakpoint in the third game. Another excellent forehand down the line leading to an easy smash gave him the break to go 2-1 up. Zverev raised his level even higher as he illustrated his all-around ability with winners off both wings, down the line as well as cross-court, together with drop shots, smashes, tricky low volleys and some big serving.

However, Zverev’s attacking approach produced a plethora of unforced errors in the sixth game, and a missed down the line pass from him gave Khachanov a precious breakpoint. Zverev saved it with a big first serve. Another big serve combined with a big forehand back behind his opponent gave him an advantage and he was able to hold, to go up 4-2.

A couple of holds later Khachanov was serving to stay in the first set. A fearsome backhand down the line gave Zverev set point, but was followed by two unforced errors, giving advantage to Khachanov. A backhand down the line winner by Zverev made it deuce again. Zverev had a second chance when a Khachanov pass flew out, and a volley that drifted long gave Zverev the first set 6-3.

Alexander Zverev started the second set as he finished the first, demonstrating his brilliance once again with some huge serving of over 210 kph, and a flashy running backhand down the line winner helped him to hold emphatically to love.

It was exhibition tennis and the pressure told immediately as Khachanov started his opening service game of the second set with a double fault followed by an unforced error. Soon he was 15-40 down. His trademark big serve came to his rescue, but an unforced error on his backhand gave Zverev a third break point opportunity. A long rally followed, which was only ever going to have one winner as Khachanov eventually dumped his shot into the net giving Zverev an early break, in a similar pattern to the first set.

Khachanov struggled to counter Zverev’s aggression, which gave the latter a further breakpoint, but unforced errors followed to give advantage to Khachanov. Zverev then showed why he is considered one of the most talented young players on tour with a clever lob over his 6 ft 6-inch opponent to make it a fourth deuce. An incredible backhand cross-court winner played with almost dismissive nonchalance gave him a second breakpoint.

Like a cat toying with a mouse, Alexander Zverev moved his hapless opponent from side to side with a backhand down the line pulling Khachanov out of position before a backhand crosscourt to the other corner of the court gave Zverev the second break of serve to make it 4-0. An easy hold for Zverev meant Khachanov was serving not only to save the gold but also from being bagelled.

He managed to keep his pride intact by holding to 30 leaving Zverev to serve it out for Olympic gold. Unsurprisingly, serving out for a match is considered the hardest thing to do and for the first time in the match, Zverev looked nervous as a couple of second serves and a forehand that hit the top of the net before looping out and an attempted backhand crosscourt winner that dropped wide left him at 0-30.

In the past, the Alexander Zverev first serve has too often buckled under pressure, but this time Zverev produced a huge 200 kph serve when he needed it most. To emphasise his serving dominance he followed it with a 204 kph ace as 0-30 quickly turned to 30-30. Zverev then produced his biggest serve at 215 kph, which Khachanov somehow returned, but after a mini-rally, Zverev was able to put away a volley at the second attempt to bring up a gold medal point.

Another massive first serve of 212 kph elicited a weak return enabling Zverev to hit a high volley into the corner which Khachanov netted. Zverev collapsed to his knees in disbelief as emotion overcame him. He had won 6-3, 6-1 to become Olympic champion on his Games debut.

ALSO READ: Zverev Gets Revenge Against Thiem in Madrid

It was one of the best performances from Zverev to follow on from his semi-final win over Djokovic. Zverev’s commanding win confirmed he is a formidable threat over the shorter best of three set format, but he will be hoping to transfer his brilliance to the longer best of five set format of Grand Slams.

If Zverev can maintain the formidable form he has shown in Tokyo at the final Grand Slam of the year, the US Open, which starts at the end of August, then Djokovic’s hopes of the calendar Grand Slam will be under threat from the player who derailed his Golden Slam dream. 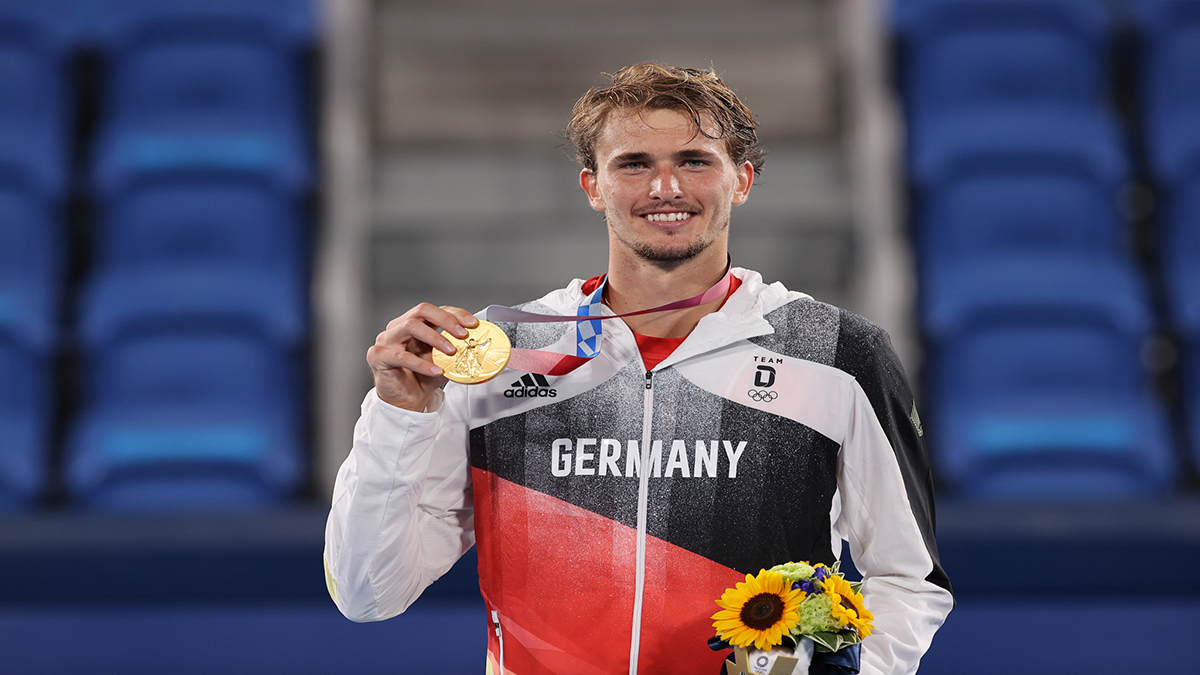