It sure is difficult to feel sorry for a newly christened No. 1 overall draft pick in the NBA, set to make millions of dollars in contract and endorsement money. But, considering the situation current Cleveland Cavaliers shooting guard / small forward Andrew Wiggins is going through, it’s certainly getting tougher NOT to.

The 19-year-old Canadian phenom out of the University of Kansas has been the center of an American media firestorm he didn’t even start. Ever since NBA superstar LeBron James made his second decision to come back to Cleveland after his four-year exodus in Miami, many eyes turned to the former Jayhawk as to what his role would be in the Cavs’ new regime. After all, with LeBron’s new-found quest to bring a championship to the team and city that drafted him, the rookie would be hard-pressed to contribute right away. That is, IF he was going to stay on as part of the team.

Having played his entire career in Minnesota, Love expressed his interest to play elsewhere since early this year. As the season wore on, rumors swirled that he could go anywhere from Los Angeles to Boston, and almost everywhere in between. Alas, no one franchise came out ahead in trade talks for the 6-foot-10 (2.08-meter) scorer out of UCLA.

That is, until James was brought back into the fold in Cleveland. The two played together on the US Olympic team that won gold in 2012, and Love expressed interest to play alongside him. Minnesota, however, wasn’t willing to give Love to Cleveland for free – in order to initiate trade talks, Andrew Wiggins had to be a part of the package. And, while Cleveland initially refused to give him up, the organization reportedly relented on July 17. The latest reports say that the trade that will land Kevin Love in Cleveland is “likely”.

Which brings us back to Wiggins – a kid with hopes that he would be playing with who many regard as the best basketball player in the world to start his career. Now, it looks like he will be moved into a franchise where wins have been at a premium for almost a decade. What’s worse is that he is, essentially, stuck in NBA limbo: per league rules, a player who is signed to a rookie contract cannot be traded for 30 days. Wiggins signed his contract on July 24, which means he cannot be traded until at least August 23. Meanwhile, Timberwolves owner Glen Taylor was quoted as saying that a trade involving Kevin Love was “likely” by … you guessed it: August 23. That means Wiggins has to deal with interviews like these for the next three weeks:

In case you didn’t watch it, that was ESPN SportsCenter anchor Bram Weinstein interviewing Wiggins, wearing a Cavaliers jersey, on Sunday about the prospect of being traded to Minnesota in 19 days. It was an awkward few minutes, to say the least. It reached a crescendo in this exchange between Weinstein and Wiggins:

Weinstein: If you had your choice in all this, what would you like to see happen, here?

Wiggins: I just want to play for a team that wants me. So whichever team wants me I’ll play for.

Weinstein: Do you think Cleveland wants you?

While he did acknowledge that he understands the business side of the NBA, and that the trade speculation was nothing personal, it looked fairly obvious that the line of questioning was uncomfortable for him to address. Again, we’re talking about a talented 19-year-old kid being used like a poker chip before he has even set foot in a professional regular-season game – and not by just the Cavaliers, but by American sports media. While you could argue that Wiggins didn’t need that line of questioning on Sunday, don’t tell me that tons of media outlets didn’t eat it up.

And, again – it’s difficult to feel sorry for a guy wanted by 28 other teams besides Minnesota, that will be earning millions of dollars, regardless, for playing a game he loves. But in the global social media landscape we live in today, Wiggins will have to deal with all the constant speculation and questions on his future until a deal is actually consummated. On top of that, look again at those quotes above – he obviously wants to play for the Cavaliers, but unfortunately for him, the franchise simply want Kevin Love more. This turns him into the NBA’s latest high-profile example of “collateral damage”.

Ultimately, this is the business Wiggins has chosen. For the next three weeks, at least, he will have to deal with one of the drawbacks of said business. But, as long as he can learn to weather the storm, all the while playing his butt off, he will be fine. 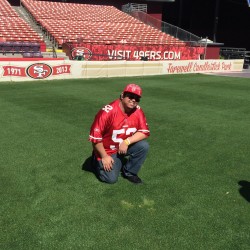 Paulo Camacho is an American sports writer originally from Davis, California. He has run his own blo...
0

has published a new post."Nunn, Heat Back in Win Column Against Spurs"
12 hours ago