The first match of this Saturday was a real treat, where Arsenal hosted Manchester City. Danny Welbeck debuted for Arsenal and Frank Lampard for City.

Surprisingly, Yaya Toure was not in the match day squad for City, following his international duties for Ivory Coast.

The match was off in a blistering pace, where Arsenal had the upper hand in the first couple of minutes. Danny Welbeck was close to a debut goal in the 11th minute, where he found himself alone with Manchester City goalkeeper Joe Hart. Welbeck tried to chip the ball over Hart, but it hit the post, and Hart was able to collect it.

Arsenal continued to press City, but it was the guests who scored the first goal off the match in the 27th minute. Jesus Navas displayed his amazing speed, as he ran half the pitch, before finding Sergio Aguero in the penalty box, who then calmly put it past a chanceless Sczcesny. City were close on a couple of occasions, but the first half ended 1 – 0.

Much as the first half, Arsenal looked the strongest in the beginning of the second half. It was however, once again, City who was closest to scoring as former Arsenal player Gael Clichy was close to scoring for City, but fluffed his shot.

Jack Wilshire scored in the 60th minute after beautiful football from Arsenal, as he went past Clichy and elegantly put it past Joe Hart in goal. This put a fire under Arsenal, as suddenly they were once again finding themselves the better team in the match, and this fire reached its climax in the 73th minute, where City failed to clear the ball, resulting in Wilshire heading the ball back into the penalty box, where Sanchez fired it past Joe Hart. 2 – 1.

Manchester City had not given up though, and in the 82nd minute, Martin Demichelis scored on a header, following a corner kick. Both teams had plenty of chances after this to secure the win, but neither teams were able to found the back of the net, so the match ended 2 – 2. 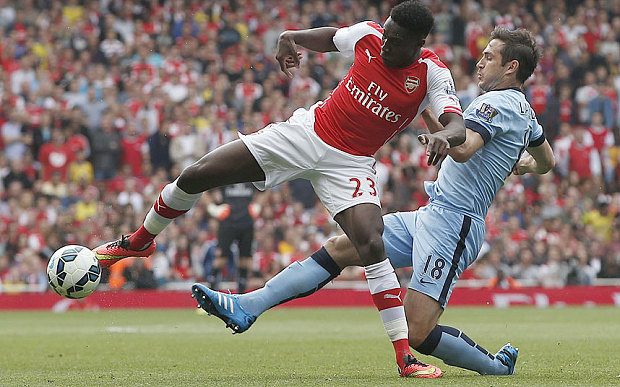