Following the international break, the Premier League returns this weekend and ultimately the biggest game takes place at the Emirates where seventh place Arsenal take on fourth place Manchester City.

Both teams will be aiming to recover from poor results in their respective previous fixtures against Stoke and Leicester. City were surprisingly defeated at home 1-0 to Stoke courtesy of Manchester Untied old boy Mame Biram Diouf’s fabulous strike, meanwhile Arsenal were held to a 1-1 draw away at Leicester.

Going in to the game, Arsenal are concerned about the fitness of midfield maestro Aaron Ramsey after he picked up an injury during Wales’ Euro 2016 qualifier against Andorra on Tuesday, however Ramsey has calmed concerns by saying “I’ll be alright, I rolled my ankle a bit. Hopefully I’ll be ready for Saturday. I’m looking forward to it.”

Wenger is also likely to give £16m new signing Danny Welbeck his debut following his impressive performance for England against Switzerland where he grabbed both goals in the nation’s 2-0 victory over the Swiss.

With Welbeck predicted to be playing in a central role, Alexis Sanchez is expected to move to his favourable right-wing position with Santi Cazorla and Mesut Ozil accompanying the midfield.

Welbeck celebrates his brace against Switzerland on Monday

Meanwhile, City could potentially be without Stefan Jovetic after he injured his hamstring during training while on international duty for Montenegro and is racing against time to be fit for Saturday. With Alvaro Negredo moving to Valencia on loan, striking options are minimal and Edin Dzeko is expected to be drafted in to replace the Montenegro striker.

Also Pellegrini is expected to make a string of changes following the shock 1-0 defeat at home to Stoke, Fernandinho is set to replace Fernando and Bacary Sagna is expected to be given his City debut with Pablo Zabaleta a doubt for the trip to the Emirates. Samir Nasri is also set to be given a start against his former employers.

What can we expect from both sides? Arsenal remain unbeaten but have only one once out of their three opening fixtures and are looking for their first cleansheet. Meanwhile, City will be aiming to bounce back from that shocking result against Stoke and will be aiming to claim victory as they will consider Arsenal as one of their title challengers.

Pellegrini’s men claimed a 1-1 draw with the Gunners last season and a tightly contested match between the two sides is expected. Both sides have plenty of attacking flair but defensively, Arsenal are not as solid at the back so the goals could go flying in on Saturday afternoon. 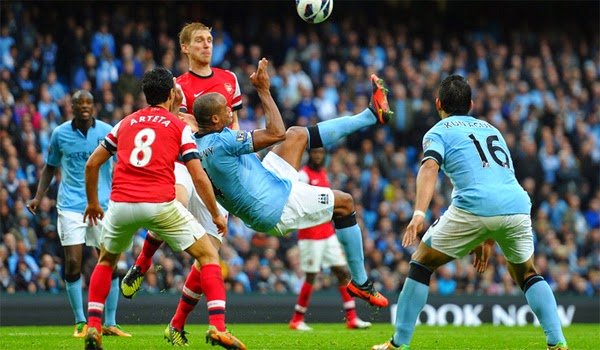