Arsenal and Manchester City met today ahead of the new Premier League season in the Community Shield match.

Arsenal won with 3 – 0, where the goalscorers were Cazorla, Ramsey and Giroud. Manchester City were without star players such as Sergio Aguero, Vincent Kompany and Alvaro Negredo, whilst Theo Walcott is still out for Arsenal.

The match started off with Arsenal looking the better team, but both teams having great chances, where for instance Nasri came close for City, with a shot close to goal which got blocked. They got ahead in the 21st minute, where Jack Wilshire passed the ball to Santi Cazorla, who then scored a beautiful goal with a shot outside the box.

The Gunners doubled their lead in the 42nd minute, where Aaron Ramsey got the ball from Sanogo after a counter attack. Ramsey twisted and turned in the box, and finally got a shot away, which saw the back of the net, behind Willy Cabellera.

Manchester City had plenty of chances and possession in the first half, but couldn’t take advantage of this, which resulted in a first half which belonged to the North London team.

Second half got under way in the same tune as the first, with Arsenal as the dominant side, but City still having plenty of possession and chances.

Olivier Giroud scored in the 60th minute, with a great strike from well outside the box after a duel with City’s Fernando. Following this goal, the match settled down a bit, with plenty of substitutions for both sides.

Both teams seemed content with the fact that Arsenal were gonna win this pre-season trophy. The match ended 3 – 0 with Arsenal as winners. A nice pre-match for the Premier League, which begins next weekend. 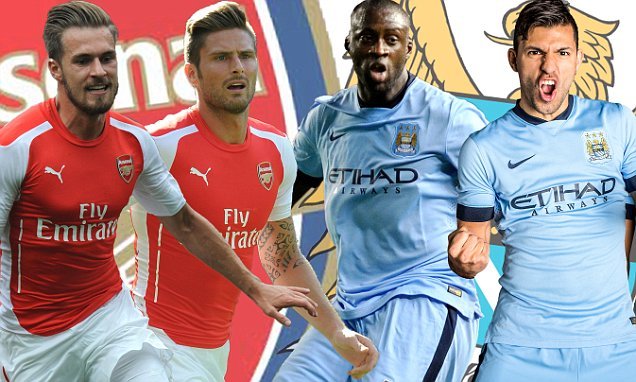