Ashley Barnes scored in the second half of Burnley’s match with Southampton to secure a priceless 1-0 win. Barnes’ breakthrough in a game of few chances lifted Burnley out of the relegation zone and gave them some breathing space over the bottom three. In a game of few chances Barnes capitalised on Betrand’s give away to slot past Forster and secure the result.

The first half was pretty uninspiring with little to choose between the two sides and no real clear cut chances created. Jake Hesketh limped off after half an hour for Southampton on his Premier League debut following a collision with Jason Shackell. His exit made way for Ward-Prowse to make his return to the Saints first team after a long term spell on the sideline with injury.

In the second half, the game began to open up as both sides searched for the breakthrough. The driving rain made the pitch slick and both teams were finding it hard to sustain spells of possession given the conditions. Jose Fonte found himself free from a Dusan Tadic corner but he was only able to head straight into the arms of Tom Heaton.

Then the breakthrough came with just over 70 minutes gone. A Saints throw in wasn’t cleared properly by Ryan Bertrand. The ball found its way to Ashley Barnes. He then proceeded to drive at the Saints box and his shot then took a deflection of Toby Alderweireld that caused the ball to bounce over Fraser Forster’s legs.

Southampton then began to have sustained spells of possession and pressure as they searched for the equaliser. Victor Wanyama had the best chance of the whole match with in the last few seconds of the match. A cross from Shane Long found its way to Wanyama in the box. His header from 6 yards out would surely have gone in had it been on target but it flew over and the game was over.

Burnley moved out of the relegation zone whilst Southampton fell out of the top four following their fourth successive league defeat. Saints will now look to regain their form as they travel to Sheffield United for a huge Capital One Cup quarter final on Tuesday night. 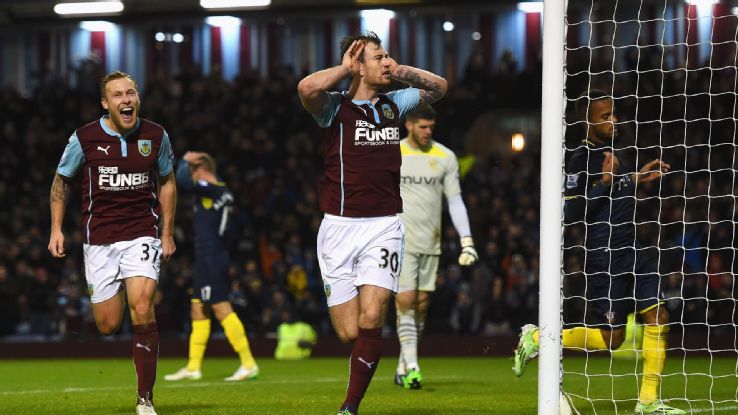