Atletico Madrid and Real Madrid met today to finalize the Spanish Supercup, which had its first leg played 3 days ago. That result ended in a 1 – 1 draw, as reported on this website. The result today, was a 1 – 0 score to Atletico Madrid, with Mario Mandzukic as the sole goalscorer. Atletico thereby won 2 – 1 on aggregate, and had an ideal start to the upcoming La Liga.

Mandzukic scored early in the game, already in the 2nd minute, as he received the ball from Antonie Griezmann at the edge of the box and fired past Iker Casillas. A perfect start for the Spanish champions, which meant Real Madrid had to chase the goal throughout the match. To make matters worse for Real Madrid, their superstar Cristiano Ronaldo was out throughout the first half, nursing an injury.

It was a hectic match, as proven by the sending off of Diego Simeone in the 26th minute. He was behaving furiously on the sidelines for a number of minutes, before finally being sent off, resulting in a sarcastic applause from the Atletico-manager. Furthermore, he appeared to slap the fourth official in the back of the head, which could result in further punishment for Simeone.

Real Madrid was unable to create much in the first half, with James Rodriguez the liveliest and closest to scoring on a couple of occasions. They remained without a goal though, and the first half ended. At the beginning of the second half, Cristiano Ronaldo was sent on, replacing Toni Kroos.

It was a second half of few chances, and plenty of yellow cards for both sides, with Luka Modric receiving two yellow cards, sending him off early. Real Madrid was unable to score, and the match ended 1 – 0, resulting in Atletico Madrid winning 2 – 1 on aggregate, making them Spanish Supercup winners. 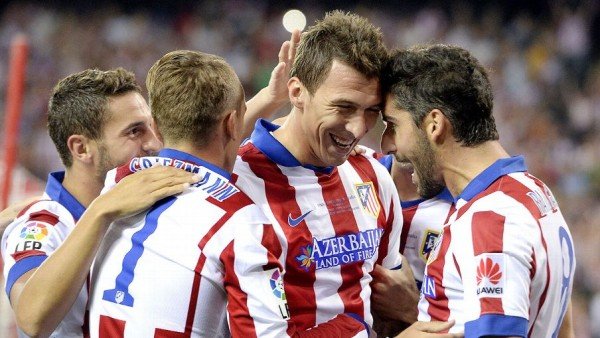