Barcelona eventually overpowered PSG to claim 15 points and top spot in Champions League Group F. PSG finished Runners up on 13 points, despite their blistering start. Ibrahimovic glided a the ball into the net with his left foot, after sumptuous build up play from Lucas and Matuidi.

Barcelona, shaken, stormed back into the match after a crossfield pass from the increasingly indomitable Mascherano was guided by Suarez into the path of Lionel Messi, who inevitably rifled it into the net. PSG had a chance to regain the lead, although Cavani’s scuffed effort, reasonable given the cross, was comfortably dealt with by Ter Stegen.

Brazilian captain Neymar broke the stalemate with a thunderous effort right before the stroke of half time, as Barcelona’s relentless passing and possession was starting to wear the champion Parisians thin on energy.

The second half saw Barcelona slowly but surely assert their dominance with gorgeously constructed triangles of passing between Iniesta, Messi, Neymar and Suarez. Having said that, they never looked entirely convincing at the back as Matthieu and Pique gave the Parisian strikers a few odd sights at goal.

The turning point was arguably Xavi’s introduction for Iniesta who himself was effective if not quite spectacular on his captain’s run.

Xavi held the ball up brilliantly to allow Messi, Neymar and Suarez one-on ones with the Parisian defenders as Suarez finished off a brilliantly intricate team move to seal the points.

PSG have certainly showed enough in the group phase to suggest they will be a real handful in the knock out rounds while Barcelona, despite their hick up in Paris have surely played their way into contention for the crown. 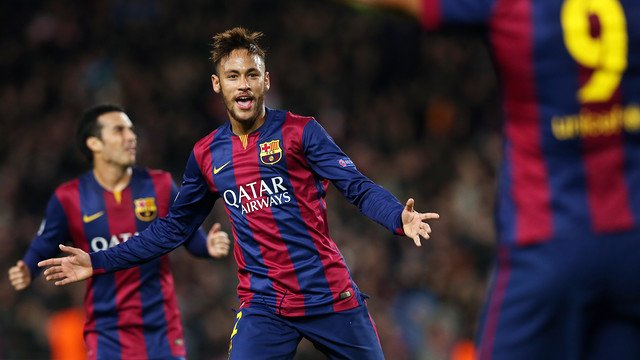