Battling Arsenal went down 2-0 tonight against Bayern Munich at the Emirates, the Gunners gave a great account of themselves against the defending champions and they more than matched their opponents in the opening 40 minutes.

The Gunners were creating the better chances and looked more of a threat, but once Szczensy was sent off that changed the whole game.

Manager Arsene Wenger surprised us all when he selected Yaya Sanogo to play ahead of Olivier Giroud who has well documented off-field problems.

However, Sanogo nearly put the Gunners ahead after he saw a close-range shot palmed away by Manuel Neuer. Moments later Neuer was in the thick of it again, saving a Mesut Ozil penalty.

Both sides were showing their intent as we witnessed counter-attacking football at its best.
England winger Alex Oxlade-Chamberlain came close to connecting with a flick-on from Sanogo, which forced Neuer to come out to the edge of the Bayern penalty area.

Arsenal were awarded a penalty on the eighth minute after Mesut Ozil was brought down by Jerome Boateng, only for the German to put it straight at Bayern goalkeeper and close friend Manuel Neuer.

Ozil wasn’t at the races today, his defensive side of the game suffered badly with him losing his marker on more than one occasion which didn’t go un-noticed by Jack Wilshere as he showed his frustration at the German.

Arsenal suffered an injury to left-back Kieran Gibbs who had to be replaced, he was playing well keeping Robben at bay until the 31st minute when he hobbled off and was replaced by Nacho Monreal.

Arsenal looked to be going into half-time with the scores level, which they would have taken at the start of the game.

However, the drama then unfolded as Bayern were awarded a penalty.

Substitute Monreal failed to follow Robben’s run into the box, this led to Arsenal goalkeeper Szczesny being sent off for denying Arjen Robben a goal-scoring opportunity.

David Alaba missed the penalty, rolling it on to the post.

10-man Arsenal went behind just after the break, Arsenal conceded to the pressure from Bayern when Toni Kroos rattled a sublime 25-yard strike into the top corner past substitute keeper Lukasz Fabianski.

Towards the end of the game Arsenal started to tire, being a man down spaces was starting to open up and it was inevitable the second goal would come.

READ:  Arsenal submit a bid for Maddison; Willock and Nelson linked with exits

Robben was terrorising Monreal down the wing, the Germans were knocking for that second goal and it game when Bayern substitute Thomas Mueller timed his run to perfection. He ran behind the Arsenal back four to get on the end of Phillip Lahm’s precision cross precision cross on 88 minutes.

This all but sealed the tie and Arsenal’s fate in the Champions League.

The Gunners should be proud of the way they played, they had the Germans on the back foot in the first-half and they can take confidence from that.

They will now head the Allianz Arena in two weeks time to try salvaging anything of the tie, being a goal down they might have had a chance. But being two goals down, it could prove a big ask. 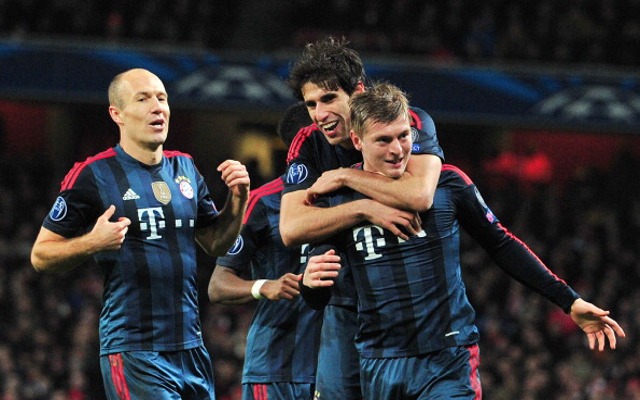