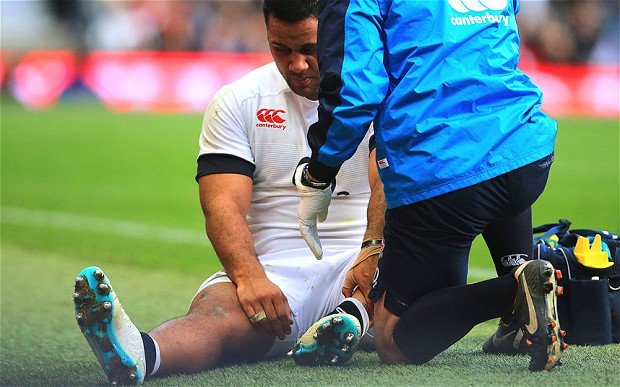 England have been dealt a blow with news that Billy Vunipola will miss the rest of the Six Nations tournament, the 21-year-old picked up an ankle injury against Ireland on Saturday and had to be replaced after receiving tackle by Ireland lock Devin Toner.

He went for a scan on Monday and the results proved he has ligament damage to an ankle; he will now miss the Wales or Italy game.

“It is a blow as Billy has had a good Six Nations but he is young and will be back,” said England head coach Stuart Lancaster.

“The encouraging thing is we have got Ben Morgan and other back rows such as Matt Kvesic and Tom Johnson, who are all competing hard for places.”

Vunipola’s replacement Ben Morgan will now take his place in the starting line-up, either Tom Johnson or Matt Kvesic will take Morgan’s place on the bench.

“The encouraging thing is that we have Ben Morgan and other back rows such as Matt Kvesic and Tom Johnson who are all competing hard for places,” Lancaster said.

England play Wales on 9th March, an England win will claim the Triple Crown for the first time since 2003.

England’s Six Nation campaign comes to an end on 15th March, with Italy being their final game in Rome.

has published a new post."Tide Rises for Rivers"
2 hours ago

has published a new post."Heat Reign Supreme in Overtime Against Kings"
2 hours ago

has published a new mt_pp."Casey Reed"
12 hours ago

has published a new post."Ungratefulness"
13 hours ago
View more activity