You could be forgiven for thinking that you were watching a match from 7 years ago upon reading today’s team sheet for South Africa versus World XV, what with Victor Matfield and Bakkies Botha starting in the second row once again, along with Schalke Burger on the bench.

The partnership that was a major factor in South Africa’s 2007 World Cup victory looked as fit as ever, with both playing aggressive,attacking rugby just like they used to a few years ago.

The World XV, led by former South African coach Nick Mallett, didn’t stick to the script. They came out playing full strength test rugby, with Alistair Hargreaves scoring in the first 7 minutes following some excellent back work from Matt Giteau and Rene Ranger.

Juandre Kruger got stopped just short of the line but somehow managed to find his fellow countryman following an awkward looking tackle stopping him just short of the line. James O’Connor added the extras and the message was loud and clear; the World XV were here to play some serious rugby.

Morne Steyn kicked for three in the 8th minute, but play remained pretty firmly within the South African side of the pitch.

A nice little chip through from Francois Steyn should really have been gathered by Hosea Gear who instead let the ball bounce to his teammate James O’Connor who was bullied on the ground by the Boks’ pack turning the ball over and spreading the ball wide for Habana to dive over in the 16th minute in what was a small flash of excitement from an otherwise quite Springbok side early on.

Steyn sent the conversion right and wide, as the Springboks went back to defending an impressive looking (if not a little bit loose) World XV for the next 16 minutes. O’Connor confidently struck another penalty over to put the World XV back in front. There was some seriously questionable passing from both sides, and the ball appeared to hit the deck every minute of the first half, a trend which fizzled out towards the end of the half.

Despite being bullied around the park for the first half hour of the game, South Africa found their stride with a wel struck Steyne Penalty and an excellently well worked try from South African and Toulon hardman Bakkies Botha, who went diving over the line following some solid passing play from the Boks, much to the delight of the crowd at Cape Town’s Newlands Stadium.

James O’Connor slotted a massive penalty from the sideline to put the match at 18-13 at Half-Time.

The pace of the second half changed completely for the Boks as they ran the World XV off the pitch, despite having problems with their discipline at the scrum, an area for weakness the Boks will be keen to fix before their upcoming test with Wales.

Steyn put the Boks further ahead with another penalty and South Africa applied the pressure at the line-out and the breakdown. Georgia’s Mamuka Gorgodze was shown a yellow card following a repeated infringement at the lineout, which the Boks immediately capitalised on, Du Plessis forcing his way over with the maul from the subsequent lineout.

Bakkies Botha came of to a large round of applause following a typically hard-fought performance, as he was replaced by Flip Van Der Merwe in the 50th minute.

South Africa nearly scored again under the posts with Number 8 Vermeulen barreling over, only to be held up with an exceptional effort from replacement hooker Andrew Hore. Rene Ranger infringed at the breakdown two minutes later, and the Sprinkboks and Du Plessis capitalised again from the lineout, crashing the Maul over in exactly the same place as ten minutes before.

Schalke Burger replaced Willem Alberts after 62 mnutes, marking his return to international rugby following a three-year break due to injury. The blonde jaws-lookalike played with a fire in his eyes and seemed to relish his return to the green jersey, despite a howler of a forward pass soon after his arrival.

The Springboks’ scrum continued to decline with the introduction of more front-row substitutions, which became more evident with the departure of the Beast Mtawarira. The World XV took advantage by bullying a usually solid scrum around the park, albeit to no avail.

Heineken Cup winning winger Bryan Habana was replaced by the lightning fast Mvovo at 68 minutes, who went on to show his devastating pace ater in setting up a try for Willie LeRoux in the 78th minute. Johann Goosen scored his first international try having replaced Morne Steyn at outhalf in the 68th minute.

Jimmy Cowan spent the last 6 minutes of the game on the bench following a slap on Vermuelen at the breakdown, George Clancy showing a yellow following some handbags between Vermuelen and Joe Tekori.

Clancy had a great game in the Referee’s jersey, demonstrating good control over the game and utilising the TMO efficiently and to great effect.

He kept both teams in check, and the game flowed effortlessly as result.

South Africa will be pleased with the result, but will be keen to get started a bit earlier in their next test against Wales. 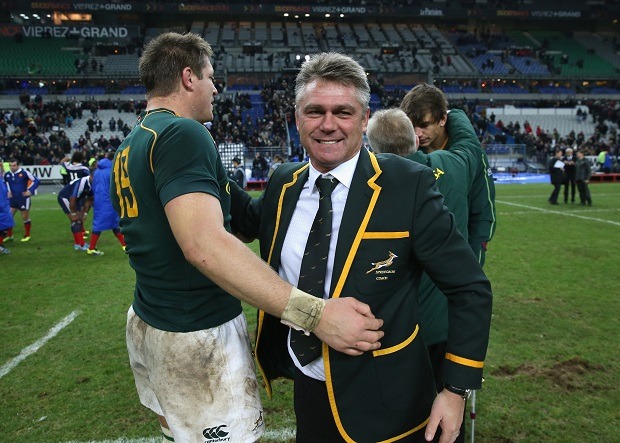