Eugenie Bouchard, the top ranked Canadian player, loses to qualifier Shelby Rogers 6-0, 2-6, 6-0 in the Montreal Rogers Cup during the second round. The crowd was packed with Bouchard fans, or better known as “Genie Army,” some even travelled all the way from Australia to watch her play. However, Bouchard was not able to meet her high expectations.

Having recently reached the Wimbledon final last month, the 5th-seeded 20-year-old  was quickly overpowered in the first set by the American. Bouchard was unable to hold her serve and was broken by Rogers three straight times in the opening set. With the entire crowd behind Bouchard’s back, Rogers, a qualifier, did not seem to mind.

Bouchard was finally able to find some momentum in the second set, after narrowly holding her serve in the first game. Afterwards, Bouchard quickly took the set 6-2, breaking Rogers all 3 times. At this point, the crowd expected Bouchard to storm off in the decider. However, Rogers had other ideas.

In the final set, Rogers broke Bouchard immediately in the first game and did not look back after that. She once again took control of the match, showing the same form that she had in the first set. After winning 5 games in a row, Rogers served out the match and  dispatched the Canadian sweetheart.

In the on-court interview, Rogers acknowledged the shocking result she had just handed to the Montreal crowd and those wishing Bouchard to make a deep run at this tournament.

Perhaps Bouchard was not able to handle the pressure, or perhaps it was just not her day. But one thing is for certain, the “Genie Army” was left disappointed. 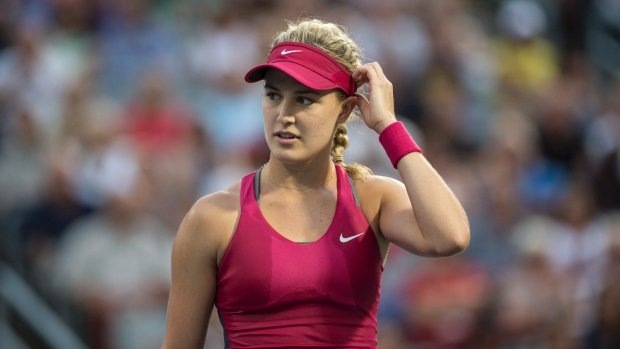