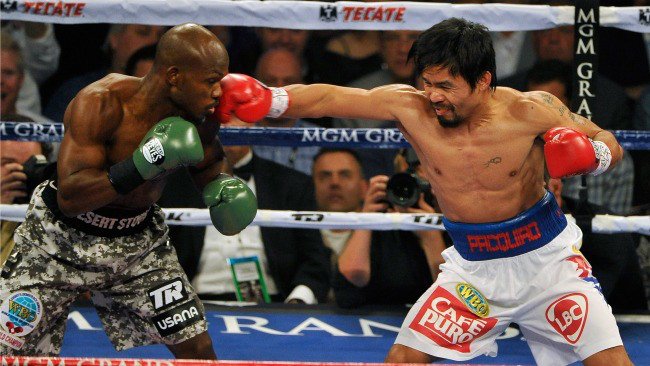 For some reason today has seen the boxing community at large indulge itself in some bizarre rumors and frankly it is hard to keep up.

It all started with reports that Manny Pacquiao was going to fight Luis Carlos Abregú from an Argentinian sports website called Ole.

If you are struggling to work out who Abregu is, he is the guy who took a beating from Timothy Bradley in 2010.

Since then he has remained undefeated but literally beaten no one of note.

Pacquiao is still harboring a big bout on the back of his successful comeback having defeated Tim Bradley and Brandon Rios, but this would be a tune up fight of the highest order serving only to prolong the disappointment of not getting the a fight with Floyd Mayweather.

Speaking of Tim Bradley, the ever reliable Dan Raphael over at ESPN has reported that Bob Arum seems to be lining up a fight with The Desert Storm and Miguel Cotto after his annihilation of Sergio Martinez.

This one seems a little more on the level and would more than likely be a close fight. The weight issue is rightly raised as an issue given Bradley has never gone above 147 and Cotto won last time out at 155 pounds. Hmmm.

Boxingscene.com had a bit of contract tennis this morning reporting firstly that there was no sign of the earlobe less Eddie Hearn sending over his part of the Kell Brook & Shawn Porter deal before reporting further that the fight is all but on!

This is good news really, Brook needs to take a step up and Porter needs to build on his growing resume after dismantling both Devon Alexander and Paulie Malignaggi.

Fighthype.com is going with quotes from Adrien Broner about the possibility of taking on Robert Guerrero.

The Ghost looked plenty vulnerable last weekend despite winning and Broner needs to beat someone people have heard of since hitting a rocky patch in the shape of Marcos Maidana and a boring victory over Carlos Molina.

Boxingnews24.com go with an interesting one saying that both Danny Garcia and Lamont Peterson will fight separately on the 9th of August to build to a unification bout.

Both would be given easy fights with names like Humberto Soto, Thomas Dulorme and Antonio DeMarco mentioned.

If even half of these come true it would make for a bizarre end to the  year. Manny Pacquiao wouldn’t have a big fight, Garcia would likely unify the 140 division before moving up to 147, Miguel Cotto vs Tim Bradley and Kell Brook vs Shawn Porter would be two barnstorming close fights and it would mean we would more than likely see Floyd vs Maidana 2 if some of the bigger names are otherwise engaged.