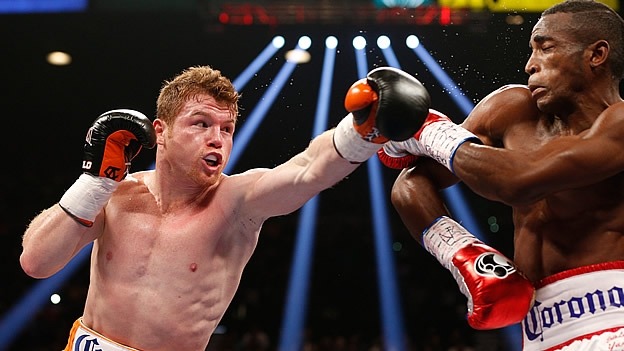 Wow. What a weekend.

No, not Germany winning the world cup! How about a split decision in the super fight of the weekend and ageing star being knocked out in 3 rounds and a British weekend of boxing that saw two stars almost fight each other for a second time outside of the ring.

It should be worth noting that good old Mauricio Herrera, who didn’t get the nod against Danny Garcia back in March, bounced back with a deserved win and will surely get a chance against an opponent of note after beating Johan Perez.

Before we get into the bigger fights of the weekend I would like to point out that my prediction of a decision win for Alvarez, a KO win for Vargas and a point’s win for Herrera paid out 16/1. Let’s hope I made you rich!

So Juan Manuel Lopez is finally done, I mean surely. He traded bombs with Francisco Vargas for 3 rounds and always got the worst of it. Round 3 in fact was an absolute treat for fans, the back and forth pocket action demonstrated exactly why JuanMa cannot cut it at world level anymore.

Vargas simply stayed in the pocket and landed the more telling, shorter blows which by the end of the round had served to stop the fading star.

In the main event, it seemed like the slightly dull fight we thought we would get we got. Personally I thought it was a very close fight and if I had to have picked a winner I would have gone with Canelo.

I thought he landed the more telling blows and showed more initiative in the fight. Lara was clearly very much in the fight and showed great hand speed and movement but he never took the fight from Canelo as a challenger is expect to in order to capture a belt.

I scored it 114 even and wasn’t particularly unhappy with Canelo getting the result.

The worst part is what comes next for both fighters. Canelo has faught the best two fighters in and around his weight class, he is probably just above Lara and well behind Mayweather.

It means that any other fight will be a step down but a big showdown with a reinvigorated Miguel Cotto could be what the doctor ordered.

As for Lara he is in a really tough place now. He lost. He looked dull and skilled at the same time.

He now is little reward and big risk for any opponent. I think he will struggle to get a big name anytime soon and can wave bye-bye to a rematch.

Back across the pond in the good old UK, Eddie Hearn treated us to a really good night of boxing culminating in both Tony Bellew and Nathan Cleverly winning by knockout to set up a rematch later in the year.

The less said about their fights on the night the better as both beat overmatched opponents as they have both moved up to Cruiserweight having fought at light heavy for most of their careers.

Bellew has claimed repeatedly that not only was he dead at the scales when the pair met at light heavyweight in 2011 but that he was robbed that night in close decision.

I’m unconvinced that either of these guys are good enough to mix it up at cruiserweight at the top end but they are evenly matched against each other.

In fact they almost came to blows after the Bellew fight as they exchanged words ringside, it really was quite funny and the rivalry is percolating nicely.

I’m sticking my neck out and think Bellew carries real power now at around 200 pounds and might be too much for Cleverly who was exposed by Sergey Kovalev in his only defeat.