With a daring drive through the middle, Brad Keselowski showed how badly he wants to win another championship.

As Larson and Harvick staged a hold-your-breath, side-by-side race for the lead following a restart with 19 laps remaining, Keselowski charged through the middle to grab control of the race.

No matter how he finishes in the next two weeks – even if it’s a pair of last-place finishes– Keselowski will survive the first cut of eliminations, in the brand new playoff  format this will reduce the field from 16 drivers to 12

“You want to get the win. It was tough out there because I’ve been here before running up front, having a really good start to the Chase, then have had problems, and then having to claw our way from there,” Gordon said.

“While you can move to the next level with that happening, you almost kind of have to win after that. I think this is a great time for us to come out of here really solid and with a great second-place finish.”

Newman, Allmendinger, Almirola and Greg Biffle each had disappointing runs and must rebound next week at New Hampshrie Motor Speedway. 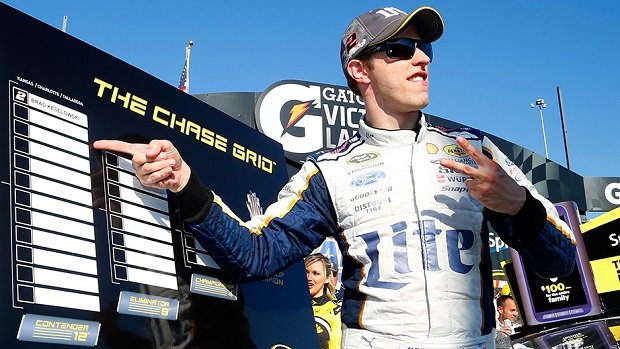