Brad Keselowski clinched a spot in the next round of the NASCAR Chase for the Cup by winning the Geico 500 at Talladega, although four other drivers were not as fortunate and saw their championship dreams come to an end.

“I know there’s probably some people out there that aren’t really happy I won,” Keselowski said. “I can understand that. But I’m a man like anyone else and not real proud of last week. But I’m real proud of today.”

The Hendrick Motorsports trio of Jimmie Johnson, Dale Earnhardt Jr. and Kasey Kahne all were eliminated from contention.

Kyle Busch could not recover from an early wreck and also was eliminated from the Chase.

“We are destroyed. We are absolutely killed,” said Busch, who appeared to be hit by Austin Dillon. “I got wrecked from behind. We are done.”

“I’m just mentally drained right now,” Gordon said. “It’s always tough here trying to put yourself in position to win but when you’ve got that much on the line and you know that your championship hopes are right there in that final moment, it’s nerve-wracking.”

Johnson and Earnhardt ran up front the whole race, swapping the lead while Keselowski rallied from an early crash to join the fray. Keselowski’s car got hit in the right side when Jamie McMurray cut a tire and spun in the middle of the pack

Brian Vickers earned the pole in qualifying, but this race was wide open from the start. There were a number of lead changes throughout the day. 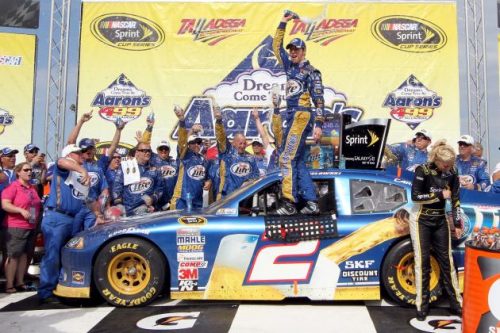