There were 17 drivers who could have raced their way into the Chase by winning Saturday night at Richmond International Raceway, but Brad Keselowski would have nothing to do with a storybook ending.

Brad Keselowski routed the field Saturday night for his fourth win of the season and the top seed in NASCAR’s Chase for the Sprint Cup championship.

Keselowski led all but 17 of the 400 laps at Richmond International Raceway, where the last race of the regular season never turned into the thriller NASCAR had hoped for. A new win-and-in format this year could have created a dramatic final push for a driver to make the Chase, but nobody had anything for Keselowski

“What a night. I pulled into Victory lane and I pinched myself once to make sure I wasn’t dreaming,” said Keselowski, the 2012 champion. “These are nights you don’t forget as a driver and you live for.”

Kevin Harvick was the only driver who appeared capable of challenging Keselowski, but it was early in the race when he led the other 17 laps that Keselowski did not claim. His Stewart-Haas Racing team again struggled on pit road.

“It’s probably the biggest thing that we have to fix in order to contend for the championship,” Harvick said.

Jeff Gordon, the points leader for much of the regular season, finished second. Clint Bowyer, who needed to win to guarantee his Chase berth, was a disappointing third.

“I knew coming in here it was a long shot at best,” Bowyer said. “We put it all out there. I raced as hard as we could. At our very best, we were a third-place race car tonight at my very best race track.”

Bowyer was caught in the middle of a scandal at this race a year ago when his late-race spin set in motion a chain of events that helped then-teammate Martin Truex Jr. make the Chase at the expense of Newman. NASCAR eventually threw Truex out of the Chase, put Newman in and added Gordon as an additional driver.

Entering with a 23-point lead, Biffle needed a finish of 22nd or better, and he flirted with falling outside the cutoff for much of the race but squeaked in with a 19th 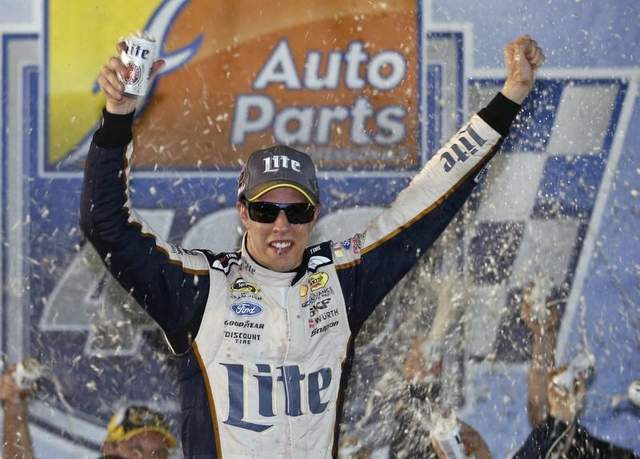