Plucked from obscurity in the VPL in 2009, Franjic has found himself an integral member of Brisbane’s path to glory and A-League domination. Able to play pretty much anywhere on the park, Franjic is quick, confident and, as is honestly said in pubs and bars around the world, “f**king good on the ball”.

A true flying wing back, Chich’s work rate and attacking flair makes his contribution to Brisbane most bodacious. Franjic has seen himself become more of a regular with the Socceroo’s and should really have already packed his bag for the flight to Brazil. Chich is a certainty to be on the plane to Rio.

Thomas Broich. Words can’t even describe the effect the talismanic former German U/21 international has had on not only the Brisbane Roar, but the A-League as a whole. From his first touch in the orange colours it was clear then Roar manager Ange Postecoglou had uncovered something special.

Broich was formerly known in his homeland as Mozart because of his intellect and grace on the ball, and these abilities more than shone with his quick rise to becoming one of the greatest A-League imports in the league’s history. Having battled serious injuries including a collapsed lung and severe depression, it is fantastic to see Thomas finding a new home in Brisbane, and really flaunting his skills to make the team tick.

Lukey Luke Brattan. Joker, clown, chain smoker and one of the best passers Ange Postecoglou had ever seen. The force in the middle of the pitch which creates everything Brisbane have. Young, hard-working and bloody gifted, Luke has become one of the most respected players in the league.

Another certainty for the flight to Rio. Brattan came out of the Cavendish Road State High academy program which has produced numerous A-League superstars over the years.

He makes some bad decisions off the pitch, has a smoking hot girlfriend and enjoys spoiling her in the cosmetics section of the Brisbane Myer Center. Being a total lad, Brattan has still found himself as the real clockwork behind everything Brisbane produce and a true element key to their success winning the 13/14 Minor Premiership. 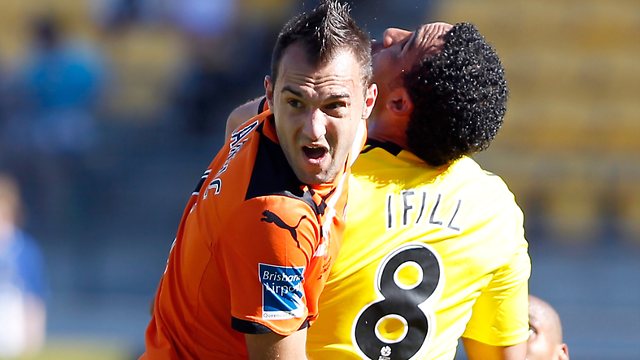