Probably the hottest news so far this season was surrounding Besart Berisha’s impending switch down south to Melbourne. Undoubtedly, Brisbane have been the most impressive side in the A-League in recent seasons, and Berisha found himself as an integral member of this set up. Roar boss Mike Mulvey faces what could be his biggest challenge as a manager in the search to replace what will be a massive gap in the departure of Berisha.

Solorzano couldn’t stop finding the net during his last stint with Brisbane, striking at a rate almost as impressive as that of Berisha.

Jean Carlos never really got to flourish however and didn’t have the same bond with the Brisbane faithful than the explosive Berisha.

Still young and a former international, it will take time for Solorzano to find his feet once again, having dropped right off the radar and not finding consistent minutes. Fighting for what could be a place in the World Cup squad, Solorzano will be keep to provide the option to fill the shoes of Besart Berisha.

Henrique: The Slippery Fish. Grand Final Hero. Brisbane through and through. Henrique is undoubtedly a fan favourite in Brisbane, but no one knows how.

The brutal fact is that a player like Henrique really isn’t cut out for football at this level. Slow, small and really not that good with the ball, all the Slippery Fish seems to have going for him is the reputation which comes with being Brazilian.

Brisbane really need to keep searching for a better replacement that the lax attitude and sloppy skills of the tiny Brazilian.

Nicklas Bendtner: The big Dane is coming to the end of his contract and has fallen well down the pecking order at Arsenal. Whilst it would be a long shot, with a big international reputation, and an open international spot left vacant by the departure of Berisha, Big Nick could be the next big thing to hit the pitch at Suncorp Stadium.

A pure physical specimen, tall, agile and has some wheels, Bendtner has a mean eye for goal and has played on some of the biggest stages in world football. Attracting such a player would be key for future advancement of the league, and just show how far the A-League has jumped not only in quality, but in terms of international reputation.

Manucho: Buried in the middle of Spain, somewhere around Valladolid you could run into a pacey Angolan with a healthy goal record. As a former Manchester United player, Manucho has clearly been identified in the past as a player with what could be world-class talent.

Whilst this potential never really got to flourish in his short time in Manchester, the 30 year old still has enough left in his legs to create some havoc around the stadiums in Australia. With real potential to succeed and a contract expiry just around the corner, Mulvey really should look into securing the services of the rapid running Angolan.

Mads Junker: Some of the talent which has been exported from the Belgian Pro League in recent years is simply astonishing. Big Bad Benteke is ripping up the Premier League and seemingly came from nowhere. Mads Junker has been floating around European football for quite some time and approaching 33, has really been there and done it all.

A real natural striker, the big number 9 has a similar strike rate to the departing Berisha. Another expiring contract and experience which comes with floating around top clubs throughout Europe. Brisbane have a successful record when it comes to plucking players out of Europe, notably Broichy and Berisha. Could Junker be the next big thing to make a real impression on the A-League?

So there it is. Brisbane’s best hopes for replacing Berisha. It is undoubtedly a huge task and Mike Mulvey really must act quickly and effectively. The gap left in the team by the relentless Albanian has to be filled rapidly to give the new name time to adapt and adjust to the style of football the Roar and Brisbane fans have come to expect from their two-time champions. 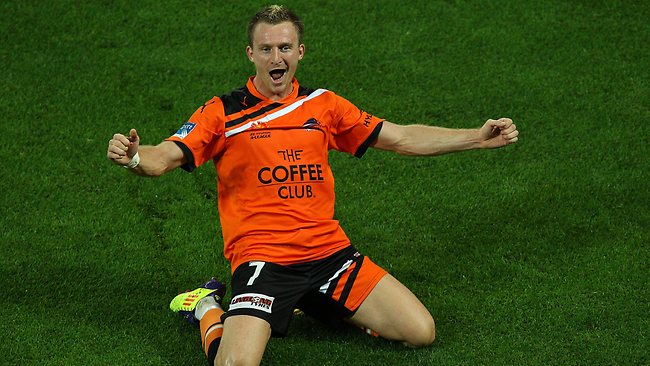