In Washington D.C during the past week, Canadians invaded the tennis courts, further stamping their dominance in the ranks of men. The first in ATP history, two male Canadians met in the finals of a tour event. Milos Raonic took on fellow countryman Vasek Pospisil. Of the two, many consider Milos to be next great thing on the tour. However, both have great potential to create waves of intrigue coming into Toronto, their native tournament, this week.

Milos has already been given a taste of the big stage this year, reaching the semi-finals of Wimbledon before inevitably falling to the once king of grass, Roger Federer in straight sets. I have always liked Milos’ game, primarily due to his instinct to serve and volley more so than players of this generation.

His biggest weapon, a serve where the point of contact maxes out at around 10′ and can reach well past 140MPH, is one of the biggest threats on tour. Along with the speed and velocity, the placement is impeccable. He is more than capable of hitting the lines or kicking it out wide. He is a formidable threat on both wins, able to generate pace and put away convincing winners on the run. He isn’t able to generate sharp angles such as Federer or Djokovic, but this is not his game.

Milos’ game is primarily to suffocate his opponents by consistently holding onto his service game. This tactic is extremely effective against poor servers and shorter players.

However, there is still a lot of work to be done if he plans on competing for grand slam titles alongside Dimitrov, Berdych, Del-Potro and other up and comers. His movement is lackluster due to his frame but it is no excuse. Both Del-Potro and Berdych are about the same height but are infinitely more effective at reaching their spots better than Milos. Their defense is also much better as they are able to generate more refined passing shots on the run.

The return game of Milos is also an area needing much improvement to back up his natural service game. Unlike Isner, Milos has the potential to create opportunities off the serve. Seen in Washington DC, his return game has definitely improved some but to challenge the top ranks, he’ll need to hone in the skill to put more points into play where he can create opportunities to break.

Vasek Pospisil is another young Canadian who is showing promise as of late. I remember seeing him several years ago and immediately striking him out of contention for anything. I didn’t see anything particularly special about him and his past performances of being consistently knocked out in the first or second rounds.

A key indicator of success at this level is consistency of winning, not losing. Recently, there has been a resurgence in his game prompted by his doubles win at Wimbledon with USA player Jack Sock. Since then, Pospisil has been playing extremely well. His major strengths stem from his booming serve and his reliable and fierce forehand. He runs around his backhand well and generates the angles and pace to put himself into a winning position.

He can play solid defense, adopting the sliding strategy seemingly developed by Djokovic in 2010/2011. Agility primed with a brilliant forehand can set him up into being a consistent top 10 player.

Again, there are areas he’ll have to improve on in order to break into the ranks of the elite among the elite. His backhand is a liability. Often, he decides to run around his backhand in order to hit his forehand. When he doesn’t hit the shot he wants, he finds himself stretch far into the doubles alley, unable to recover for a down the line shot by the opponent.

You see Federer constantly in this position as well. In today’s game, a reliance on a particular groundstroke is detrimental. He will have to improve the consistency, placement and power of his backhand to create pressure to the rising stars. Fitness is also key for him.

After playing two matches in one day and a final on the next day, these are the types of situations where fitness is absolutely essential. On Sunday, against Raonic, he came out flat, giving an uninspiring performance, losing 1-6 in the first set. Albeit, I am sure he was tired, but these are the moments where champions need to rise to the occasion.

Overall, tennis is at a good point for the young stars. While it is has to say there will be another golden era in the next 5 years, the competition will be just as fierce with the young stars developing a hunger to establish a name for themselves among the game’s greats.

Milos Raonic is currently ranked number 6 and Vasek Pospisil is ranked 27. Both are playing in Toronto this week and are looking to repeat their performance of last year by reaching the semi-finals and beyond. 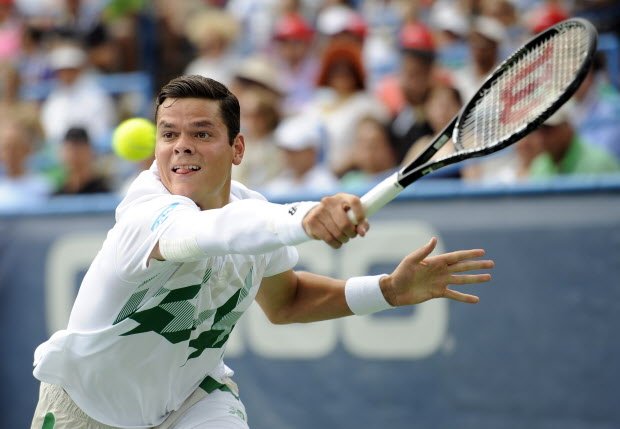