After a woeful first encounter the Kiwis needed to bounce back. Pakistan won the toss again and put the visitors in to bat. It was a very cautious start but they managed to kick on towards the latter part of their innings.

Pakistan bought back T20 specialist Umar Gul who has career best figures of 5-6 against New Zealand, this would be a confidence boost for him coming into the side after a long time on the side-lines due to injury.

New Zealand managed to limp to a score of 144 which seemed to be a competitive one on a pitch that was slow and well suited to the Pakistani spin attack. Pakistan would hope that the addition of the in- form Ahmed Shehzad would help them to chase down the target set by New Zealand.

New Zealand opted to start their innings with a spinner in the form of the inexperienced Anton Devcich who had Ahmed adjudged LBW on ball that looked to be missing leg stump. Pakistan were still battling hard but the run-rate seemed to be creeping up and wickets started to tumble.

Shehzad and Nasim put on a stand of 40 but it was felt that the game was swinging in favour of the bowling side. A target of 145 now seemed like 180. Pakistan needed some lusty blows and there was only one man for the job, in walked Shahid Afridi or ‘Boom Boom’ as most would address him as.

Afridi tried his best; he even took the odd single which is not something we would associate with him. At one stage Afidi was batting at a strike rate of over 250 an innings that gave belief to the much fans.

However, with Pakistan requiring 13 runs per over Afridi took matters into his own hands with the side down to 104-7 with the loss of Umar Akmal and Anwar Ali, Afridi cleared the boundary on numerous occasions before getting a faint tickle to the keeper when trying to pull a short delivery by Neesham who he had spanked for six on the previous delivery.

Pakistani fans feared the worst with the demise of Afridi it was all over even though Tanvir tried to salvage his team but it was to no avail. New Zealand held their nerve and levelled the series 1-1

After both the test and T20 series resulting in a 1-1 draw it’s all about who can hold their own in the upcoming ODI series. With the world cup fast approaching it will be good to see how each player performs with potential places for the World Cup squad up for grabs. 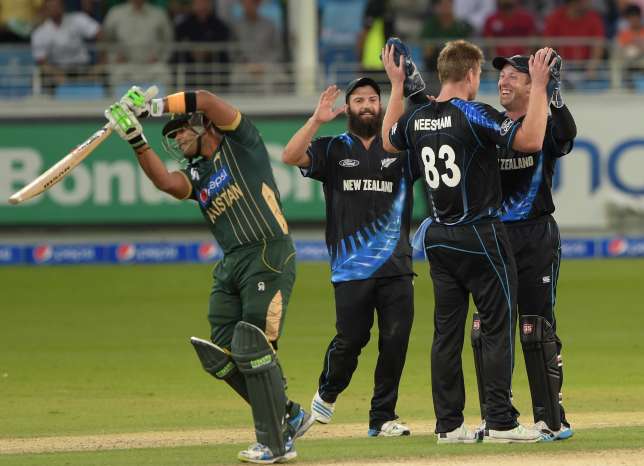