Carl Edwards claimed a rain-relayed win at Bristol Motor Speedway, where weather wreaked havoc on another Sprint Cup race. A caution with 77 laps remaining sent most of the field to pit road, Edwards’ crew chief, Jimmy Fennig, made the call to leave his driver on the track. The move gave Edwards the lead on the restart with 70 laps remaining.

He had no trouble pulling out to an easy lead and had victory in sight when the yellow caution lights came on with two laps remaining. No one was sure what the caution was for and Fennig even wondered if water damage might have caused the lights to turn on.

Edwards becomes the fourth winner of 2014, joining Dale Earnhardt Jr., Kevin Harvick and Brad Keselowski in the first season in which victories help cement berths in the 16-driver, 10-race championship playoff that ends the season.

“I’m part of a group of guys that can go have some fun and focus on the final 10 races to get to this championship,” Edwards said. “I’ve been a little bit jealous of those guys who have wins this early.  I can’t imagine what it must be like to be able to come to the racetrack and have all that pressure off of you. Now we’ll get to go have some fun.  I’m really excited about the next 22 races.  That’ll be a blast.”

The rain caused two delays lasting more than five hours — one that delayed the start Sunday by almost two hours, and one that stopped the race for 3 hours, 18 minutes. Third time seemed to be the charm,as they were able to get the race in without an additional rain delay.

Tony Stewart managed to salvage a horrific start to the weekend  as he qualified 37th and ended by finishing a season-best fourth.

“I’m pretty excited about that,” Stewart said. “Everybody just worked hard all weekend. We had a long way to go from Friday, when we weren’t very good and every day we just got better and better. So, I’m really proud of this team.” 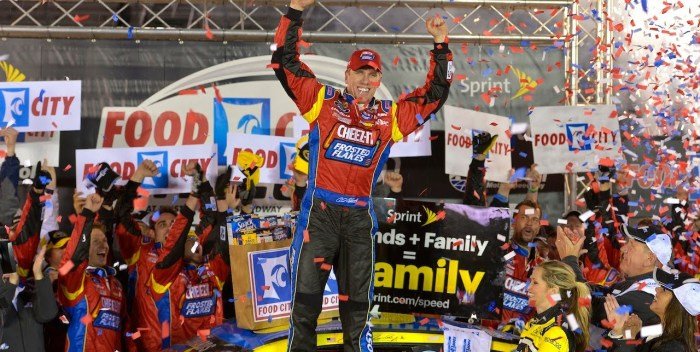