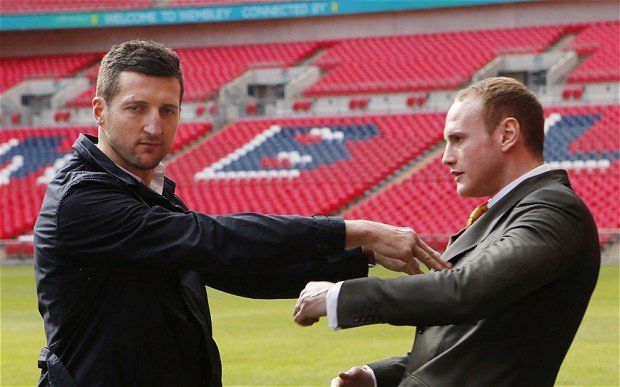 Tempers have already flared between Carl Froch and George Groves as the pair was promoting their rematch which will take place on May 31st at Wembley Stadium; the fight has sold its initial 60,000 tickets within the first hour.

Groves was trying to get under the skin of Froch as he did in the first fight, he continued where they left off in the opening press-conference, playing with a Rubik’s cube while Froch spoke and his confident demeanour clearly angered the 36-year-old, who pushed Groves as they posed for photographs.

“Carl can say what he likes and only he will know the true answer,” said Groves.

“We will look at it how we want to look at it. I know I’m going to be ready. I know I’d never prepare for a fight and not be ready.

“He’s struggling to hold it together right now and I don’t blame him. I understand why. He’s in a fight that he can’t possibly win.” While it seems as if there is bad blood between the pair, George Groves admits that he is emotionless towards his opponent.

“I don’t like him, I don’t dislike him,” he said. “I’m emotionless towards him because we’re going to fight. In the build-up people said there was animosity and it came across that way, but at the same time I didn’t like or dislike Carl.

“I just had to be quite aggressive and quite forceful and quite to the point and blunt because I needed him to respect me, which he failed to do and take me seriously.

“He took me seriously, because he got in good shape, but the things he was saying, weren’t making sense.

Carl Froch has admitted that he wasn’t mentally prepared for his first fight against George Groves, the Nottingham fighter won that controversial decision and the pair will go toe-to-toe again at Wembley Stadium.

But he insists he will not make the same mistake again, Froch added; “”What went wrong for me in the last fight was it was difficult for me to bring my A game,” he said.

“It’s difficult to fight somebody who’s not boxed anyone in the top 15 and when everybody is saying it’s a mismatch.

“After a while, you start listening to it. Mentally last time I was not at the races. I’m not going to make that mistake again.”