The last time the Carolina Panthers and Green Bay Packers met was in 2011, Cam Newton’s rookie season. That game was a shootout, as Newton passed for 432 yards and Aaron Rodgers threw for 308. The Packers won that game 30-23.

A similar scenario presents itself on Sunday, as the Panthers will travel to Green Bay to face the high-flying Packers.

Each team is in first place in their respective divisions. The Panthers, at 3-2-1, lead the NFC South – for now. The Packers are tied with the Detroit Lions for first in the NFC North with a record of 4-2. Both teams need a win to stay in the race for the playoffs in the very competitive NFC.

Carolina’s defense has just been flat-out bad this season. After looking like they had gotten back on track against the Chicago Bears in the second half, the Panthers defense fell back into their undisciplined and sloppy ways against the Bengals last week, giving up over 500 yards of total offense. They are missing easy tackles and are unable to get pressure on the opposing quarterback, which leaves their very weak secondary exposed. Aaron Rodgers could have a record day against this defense.

Speaking of Rodgers, he’ll have to carry this team once again this week, as Green Bay’s defense is also weak this year. The Cam Newton of old returned last week, as for the first time this season he rushed for a touchdown. He ran a career high 17 times for 107 yards and threw for 284 more yards and two more touchdowns. Green Bay is dead last in the NFL in rushing defense (154.5 yards allowed per game). The Panthers will need to open up the playbook and run Cam as much as they can on this defense if they want a shot to win. Doing so will not only tire out the defense, but open up the passing game as well. Without rookie wide receiver Kelvin Benjamin, who has been very reliable this season, these receivers will have to step up and help Newton out.

Both quarterbacks will have to step up to give their team a chance, but the edge goes to the one who has led his team to a three-game winning streak. In those three games, Aaron Rodgers has thrown for 722 yards, ten touchdowns and NO interceptions. Behind strong play from Rodgers, this Packers offense will destroy the Panthers’ weak defense. Despite Cam Newton’s strong play, it will not be enough to help the Panthers win this one. 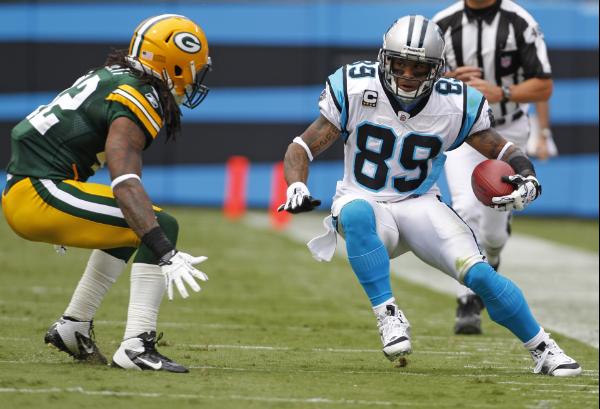