An inquiry, held by the French Senate, over the chaos that ensued outside the Stade de France in May has exonerated all Liverpool fans of any wrongdoing.

The inquiry also found that there was a string of errors and failings made by authorities outside the stadium which was the venue for the 2022 Champions League Final.

Initially, it was Liverpool fans who were blamed for the disruption through the use of fake tickets and also unnecessary crowd chaos that made it more difficult for authorities to contain.

That message was also echoed by UEFA who displayed a message on the screens inside the stadium stating that the match was delayed due to the late arrival of fans.

That message was afterward rebuked by the European governing body of football, and they also promised that a full inquiry into the events surrounding the final would be investigated.

This came after both Liverpool fans and the hierarchy of the club, including Chairman Billy Hogan pressured UEFA into an independent inquiry and a full apology to the fans of the English club.

The report stated that “The systems put in place had major shortcomings with regard to the intelligence (absence of hooligans but presence of delinquents in large numbers), the transport routes for supporters (removal of a drop-off route at the surroundings of the stadium) and insufficient communication.”

It added, “It is not only in the execution that problems arose. Upstream, the crisis scenarios were insufficiently worked on and did not demonstrate the necessary flexibility in the face of so many unanticipated events.”

It has been confirmed that all Senators that were involved in the inquiry have agreed on its findings and reiterated that the events that occurred were caused by a “chain of administrative errors”.

Fan accounts of the Events at the Stade de France

When asked about their experiences at the Stade de France on the night of the final many Liverpool fans made clear the horrors of the events that unfolded at the French national stadium.

One fan recalls his experience of being in a crush of fans saying ‘I was not in control of when I moved, I was being moved along by the pressure of fans from behind me.

Another fan stated that ‘The whole thing from start to finish was horrendous’, he also explains that he was certain the tickets he had purchased were 100% real as he bought them off of the club, Liverpool FC. He continues by describing that the group of nine people he was with were split up “within 30 seconds”

One other fan also explains how their kids were distressed and crying as they were directly up against the gate which had been closed by French authorities. This fan says, ‘We were directly against the fence and my daughter started to cry’.

UEFA opened the gates at the Stade de France at 6pm, local time, 3 hours before the planned kick-off time.

At 7pm, again 2 hours before kick-off, Liverpool fans were held at a checkpoint near an underpass POINT 1

At 8.25pm, 35 minutes before kick-off, Fans complained of crushing near Gate Y, a point of entrance for Liverpool fans. POINT 2

At 8.46pm, 14 minutes before kick-off, it was announced that the 9pm kick-off would be delayed due to ‘fake tickets’ and fans not being inside the stadium yet.

At 9pm, videos emerged on social media of both sets of fans being ‘pepper sprayed’ by authorities outside the stadium POINT 3

At 9.36pm, the final officially started, but even by 10pm, many Liverpool fans were still queuing to get into the seats. 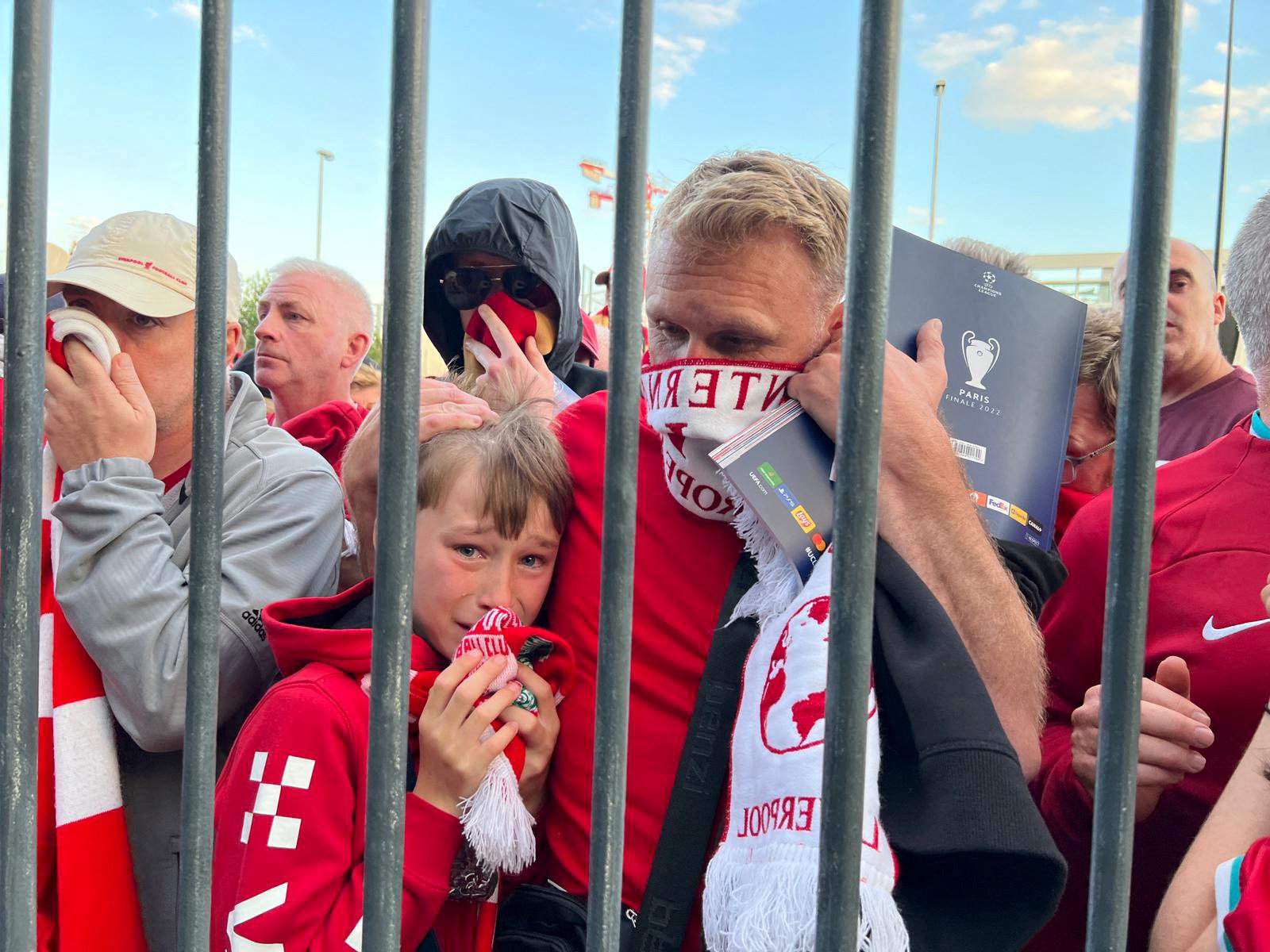