Cincinnati Bengals being arguably the world’s most popular sport comes with a price.

That price being that the NFL is often the most criticized league ever. Heck in this day and age even the most hard-core fan of a team will criticize it when they feel it warranted, if you don’t believe me just check out my column on Cincinnati Bengals Andy Dalton’s contract extension. However every once in a while something will happen to totally make you feel guilty about any criticism you’ve ever given a sports league.

In recent years the NFL and its teams have chosen to hold preseason practices throughout their state in markets that might have a more difficult time going to an actual game to try to show them that the effort would be worth it. I’m happy to say that my first opportunity to experience this in person at last night’s visit to Dayton Ohio’s West Carrollton High School Football Stadium; gave me nearly 100% satisfaction and a feeling of pure joy!

My father and I arrived at West Carrollton Stadium around 3:15 PM EST with the gates scheduled to open at 4 PM EST for a scheduled practice start time of 5:30 PM Eastern. Our local news had estimated about 5,000 fans to attend and after speaking with the high school athletic director I learned that the stadium only had four wheelchair spots available.

As such I was a bit worried that if we had just gone down we would not be able to get one of those spots and be able to see the event; so I emailed one of our local television stations Fox 45\ABC 22 to ask for and was subsequently granted VIP wristbands for the event.

For those curious an NFL practice is basically the same experience as an MLB batting practice would be if you’ve ever experienced that; meaning that all you really saw was warm-ups, a few plays, and contact drills. In other words don’t ever attend one expecting to see the equivalent of game action.

The appeal of the event if the opportunity to see your favorite players on your favorite team in person and of course the chance to receive autographs and speak to them.

My chance was successful and by far the highlight of the evening! Defensive tackle Domata Peko called me stud. As you can imagine I burst out laughing at the idea compared to someone like him. Believe it or not that wasn’t the most unexpected autograph experience of the evening.

Starting linebackers Vontaze Burfict and Rey Maualuga both appeared to be absolutely shocked that I knew who they were by name immediately when they came up to me.

Rey Maualuga even gave me a facial expression of surprise and seemed to take a few steps back at first. It’s wonderful to see that at least in the case of these two players athletes don’t realize what kind of superstars they actually are in the eyes of us fans and remain humble and down-to-earth.

Starting running back Giovani Bernard was the nicest guy in the world and went out of his way to carry on the longest conversation of the night in the few minutes the players had leaving for their bus at the end of the evening. Not only did he talk to me for a while but he by far made the night of the truly nice girl I met standing next to me in line named Megan Blades as he signed her jersey of his number and took a picture with her!

The opportunity to make a new friend was the last thing I expected but I owe such a great deal to Megan Blades and her friend Whitney Osman because without them I would not have been able to get very many autographs. I made the mistake of thinking for some reason that the majority of the players would have their own sharpies.

As it turns out, only a few of them did so without Megan allowing me to borrow her spare I would have missed out for sure. She’s even extended her kindness by allowing me to have/post her photos from the night; as my father is what you would call “smart phone challenged.” As a result most of my photos on my phone did not turn out all that well. So thank you so much Megan and Who-Dey!

Overall the only really disappointing aspect of the evening other than missing out on the chance to get autographs from AJ Green and Andy Dalton; was what on the surface from my experience at least, appears to be the only mistake in preparation that West Carrollton High School made for the event.

At least in the section of the stadium where we were located. The concessions were horrible as far as choice and taste, leaving us unfortunately starving by the time we got home.

In closing a huge thank you to the Cincinnati Bengals/NFL, West Carrollton High School and the city of Dayton for allowing this event to happen! I truly hope that this is not the last time that the Bengals will come to our city, as the players I spoke to definitely expressed to me that they had fun doing so and want to return. 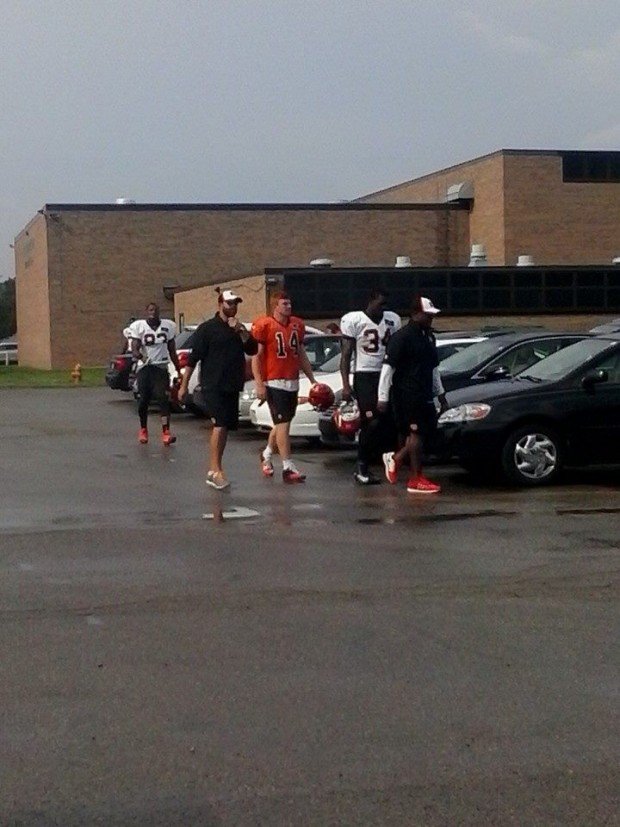