If ever a game encapsulated a player, then Jermain Defoe’s debut for Toronto FC was surely it. His match-winning double against the Seattle Sounders showed the former Spurs man at his best: poise, calmness personified, and a deadly instinct to match.

Was there ever any doubt that Defoe would fill his boots in Major League Soccer? Supporters of Toronto FC, a club synonymous with failure, in MLS circles at least, could be forgiven for fearing that this ultimate marquee signing would somehow go belly-up. Indeed, where Toronto are concerned, things are rarely straightforward.

It was a blessed relief, then, that the manner of this victory could so clearly be transcribed, that Defoe appeared so elevated above the rest of the game. Two one-on-ones, two goals, and some brave rearguard action.

As an Englishman studying out in Toronto, I am keener than most for Defoe to spearhead a brave new era for the Reds, and the signs are certainly promising. Having taken a great deal of flak from all quarters, and carrying the hopes of 17,000 season ticket holders on his shoulders- who says ‘soccer’ isn’t big in North America?- Defoe knows he has to deliver.

Question marks about the quality of the opposition will never be far away for the striker. Admittedly, as a staunch supporter of MLS, the quality of defending for Defoe’s second goal will raise a few knowing smirks from the cynics.

A wayward back-pass and all the time in the world, and Defoe had his brace. But the striker is what he is. He takes chances, whether it be in the Premier League, in MLS, or in the World Cup.

Ah yes. The World Cup. Nobody can doubt Defoe’s prowess; he is Tottenham’s fifth highest goalscorer of all time. A record like that should not be taken lightly. And yet Defoe probably finds himself an outsider for Roy Hodgson’s squad.

It may well be a case of ‘out of sight, out of mind’ for the England manager, whilst everybody else may find it easy to dismiss whatever Defoe achieves in Canada as ‘cheap goals’.  Ultimately, his decision to move abroad may well cost him.

There’s every chance that it could all come down to a shoot-out between Defoe and Danny Welbeck. But for two players whose game is so ostensibly reliant on confidence, goal tallies of any form should not be ignored. Defoe’s quality was so clear for all to see on Saturday that it’s quite conceivable that the striker could go on some sort of super-human scoring streak.

Cheap goals or not, that will bring a confidence that could be difficult to ignore. By contrast, Welbeck, in an increasingly poisonous atmosphere at Old Trafford, may be a fragile man by the time May comes around.

So, to sum up, keep a keen eye on things over on this side of the pond. It’d be a brave man that’d bet against Defoe taking a one-on-one, even against the likes of Uruguay and Italy. Don’t dismiss Defoe as a footballing castaway just yet. 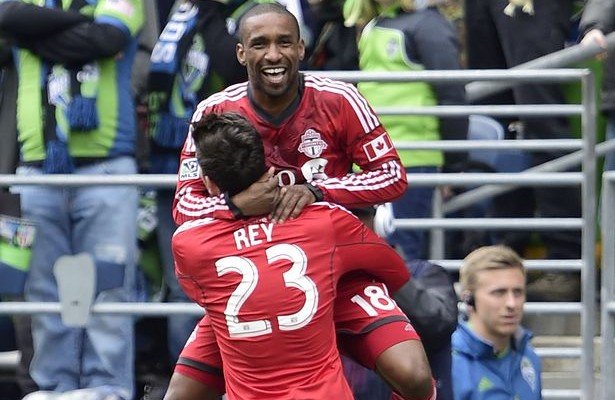