Diego Maradona is regarded as one of the greatest players to have ever played fooball, the Argentine showed his silky skills between the 70s-80s, in later years he would become a controversial figure after failing a drug test, for cocaine, in Italy, and he was sent home from the 1994 World Cup in the USA after testing positive for ephedrine.

During his professional club career, Maradona played for Argentinos Juniors, Boca Juniors, Barcelona, Napoli, Sevilla and Newell’s Old Boys. At club level, he is most famous for his career in Napoli where he won numerous accolades. In his international career, playing for Argentina, he earned 91 caps and scored 34 goals.

He played in four FIFA World Cup tournaments, including the 1986 tournament, where he captained Argentina and led them to their victory over West Germany in the final, winning the Golden Ball award as the tournament’s best player.

In that same tournament’s quarterfinal round, he scored both goals in a 2–1 victory over England that entered football history, though for two different reasons.

The first goal was via an unpenalized handball known as the “Hand of God”, while the second goal followed a 60 m (66 yd) dribble past five England players, voted “The Goal of the Century” by FIFA.com voters in 2002. 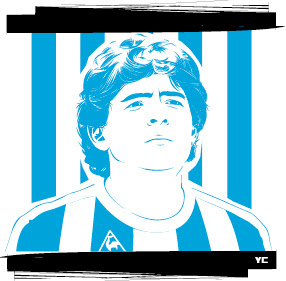 2 – There has always been a rivalry between Maradona and Pele.  Talking about Pele’s award for ‘Best Ever Player, Diego said “Pele should go back to the museum.“

3 – Maradona’s first name has its origins in Greek and Hebrew despite being used largely in Italian and Spanish these days.  It means either a supplanter or a teacher.

4 – Maradona has two children – legally.  In a slightly ambivalent attitude towards fatherhood he once said: “My legitimate kids are Dalma and Giannina. The rest are a product of my money and mistakes.”

5 – Maradona’s middle name is Armando – it means man in the army.  Perhaps if we take it as a metaphor for his soccer career, it is quite appropriate.

6 – He represented his country, Argentina 91 times (though to his opponents it must have seemed much more than that).

7 – During that time he scored 34 goals for Argentina.

9 – He played for Boca Juniors, being instrumental in their rise to the League Championship in 1982 before he moved to Barcelona.

10 – In 1985 he left Barcelona for Napoli where he contributed greatly to their winning two Series A titles – their only such title to date. 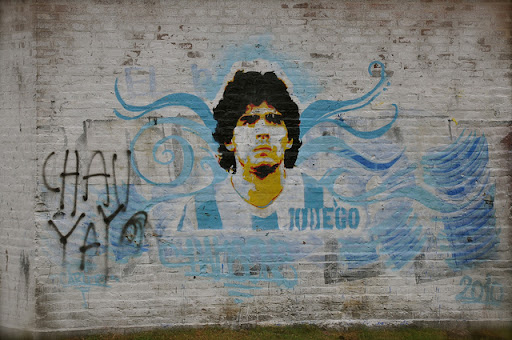 11 – Maradona was skipper for Argentina sixteen times – this is the world record for the most appearances as skipper for a country in tat tournament.

12 – Maradona was only 15 when he started his professional career, making his debut for Argentinos Juniors on March

13 – He has really been in 5 World Cups.  He represented Argentina in their youth squad in 1979, winning the Youth World Cup in Japan.  The team won 3-1 against the Soviet Union.

14 – At 16 he made his international debut.  This was at the Bombonera stadium in Buenos Aires, the capital of Argentina.  The match was against Hungary

15 – Che Guevara is one of his heroes.  He has a tattoo of the revolutionary on his right arm. He is also best mates with Fidel Castro.

16 – Diego was a consistent target for dirty tricks in his international career.  During the 1986 World Cup in Mexico alone there were 53 fouls against him.

17 – 1986 was a good year for Maradona.  He captained his country to World Cup victory against West Germany, beating them three goals to two in the final.

18 – The same tournament gave England fans his most notorious moment.  In an infamous moment he scored against the English team in the quarter final – using his hand.  After the incident, which he would not live down in the English press for many a year, he said: “The goal was scored a little bit by the hand of God, a little by the head of Maradona.”

19 – After smashing a photographer’s camera for being intrusive, Diego said “I did it with the hand of reason.”

20 – Maradona had a problem in the USA at the 1994 World Cup.  He played only two games ad scored only a single goal (against Greece).  The reason?  He failed a dope test and was sent home with his tail between his legs. In 1991 Maradona also left Napoli after he had failed a test for cocaine. 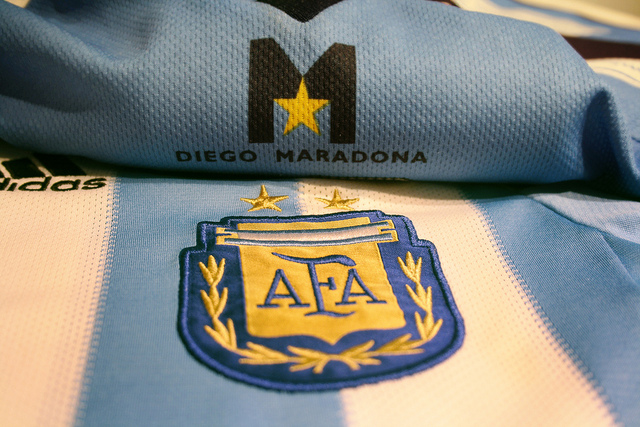 21 – Maradona and Claudia Villafane married on November 7 1989.  They were married for fifteen years, divorcing in 2004.

22 – He left owing Napoli a little bit of money to the Italian tax man.  Officials said in 2009 that Maradona owed them €37 million. However, more than half of this is interest on the original debt.

23 – Despite their rivalry, when Maradona became a chat show host on Argentinian television in 2004, Pele was his very first guest.

24 – Maradona became manager of the Argentina’s international squad two years ago, in October 2008.

26 – It hasn’t always been a bed of roses since then.  During the World Cup qualifiers the team lost by an astounding six goals to one against Bolivia.

27 – Despite this terrible defeat the team managed to get through to the tournament.  To his critics (who were legion) Maradona retorted. “To those who did not believe: now suck my d**k – I’m sorry ladies for my words – and keep on sucking it. I am either white or black. I will never be grey in my life. You treated me as you did. Now keep on sucking d**ks. I am grateful to my players and to the Argentinean people. I thank no one but them. The rest, keep on sucking d**ks.”  Not one for revenge then.

28 – FIFA weren’t terribly happy about this foul mouthed outburst.  They slapped a two month ban on him.

29 – Maradona got his own verbal revenge against FIFA when he complained vociferously about the new ball to be used in the 2010 World Cup tournament in South Africa. “I would ask all Fifa directors to stop talking about me and to start working on having a proper football. This ball is useless. It’s impossible to control.”

30 – Back in 1998 he said, about the World Cup of that year. “The players have all got square feet. They are like Robocops, they have more need of lubricant than massage. I don’t believe the tournament could be worse.“ 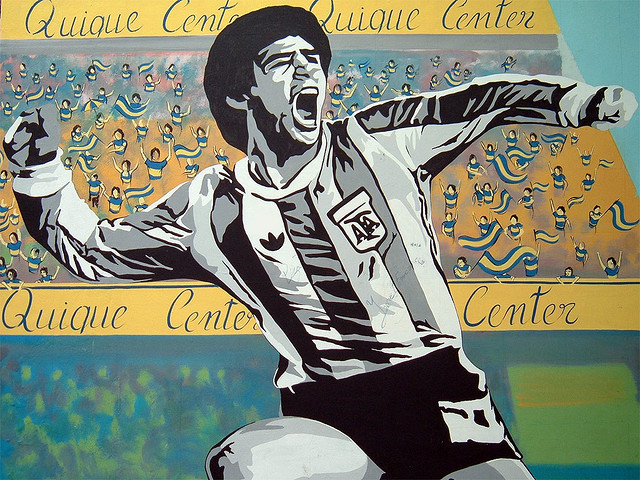 31 – He will stick by his players.  When Lionel Messi failed to score a single goal in the 2010 tournament he said. “Anyone saying he didn’t have a great World Cup is an idiot.”

32 – Yet some will stick the knife in.  A former team  mate, Valdano, said of him.  “He is someone many people want to emulate, a controversial figure, loved, hated, who stirs great upheaval, especially in Argentina… Stressing his personal life is a mistake. Maradona has no peers inside the pitch, but he has turned his life into a show, and is now living a personal ordeal that should not be imitated.”

33 – Such is his following back home, the Argentine Football Association asked FIFA to put his famous No 10 shirt in to retirement, in his honor.  Unsurprisingly, FIFA said, “No, niet, non”.

34 – Maradona has a stadium named after him – the team Argentinos Juniors honored him by naming their ground Estadio Diego Armando Maradona.

35 – Politics are something upon which Maradona has been more than willing to comment.  After the 1986 Hand of God incident he said about England: “It was as if we had beaten a country, more than just a football team.”  The two countries had been at war for real only four years previously.

36 – Maradona has had his own personal problems with drugs.  Interviewed in 1996 he said: “I was, I am and I always will be a drug addict. A person who gets involved in drugs has to fight it every day.”

38 – In 1990 he was held in such high esteem that when asked which players he was putting on the pitch the Argentinean Manager Carlos Billardo famously replied: “Maradona – and ten others.”

39 – Although Maradona has not done a Cantona and acted in movies he was the subject of a documentary by the Serbian Filmmaker Kusturica.  It made its world premier at Cannes in 2008.

40 – Sir Bobby Robson said of the player in 1986: “With Maradona, Arsenal could have won the World Cup.” Bob Wilson said of Maradona: “a flawed genius who has now become a genius who is flawed.” 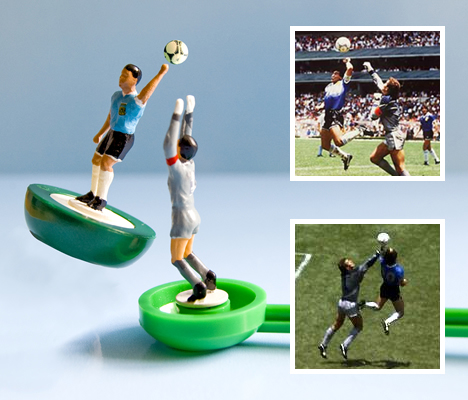 41 – FIFA have called his 1986 goal against England the Goal of the Century.  No, not the Hand of God goal – the one which happened four minutes afters when he dribbled past desultory defenders to put one past England goalie Peter Shilton.  That made the score 2-0.

42 – In 2006 at the World Cup in Germany Maradona fell out of his pram about Pele – again.  He refused to go to the tournament’s opening ceremony, saying “I’m not here to look at bloody Pele walking around.”

43 – Pele got his own back.  This year, reflecting on Maradona’s tenure as Manager of the Argentinean National Squad, Pele said: “But it isn’t Maradona’s fault. It is the fault of whoever put him in charge.”

45 – After only Batistuta and Crespo he is the third highest goal scorer for Argentina – ever.

46 – Ever since 1986, it is common for Argentines abroad to hear Maradona’s name as a token of recognition, even in remote places.

47 – Psychologists have even got in to the scramble to say things about the famous player.  Pyschologist Gustavo Bernstein has said: “Maradona is our maximum term of reference. No one embodies our essence better. No one bears our emblem more nobly. To no other, in the last twenty years, have we offered up so much passion. Argentina is Maradona, Maradona is Argentina.”

48 – Maradona’s fans are famous for being the ultimate devotees.  In 1998 they started the Church of Maradona in Argentina.  So this 2- October this year is actually 50 DD (Despues de Diego or After Diego).

49 – For all his ups and downs, Maradona remains one of the best player the world has ever seen.

50 – The World will probably never see another Maradona again! 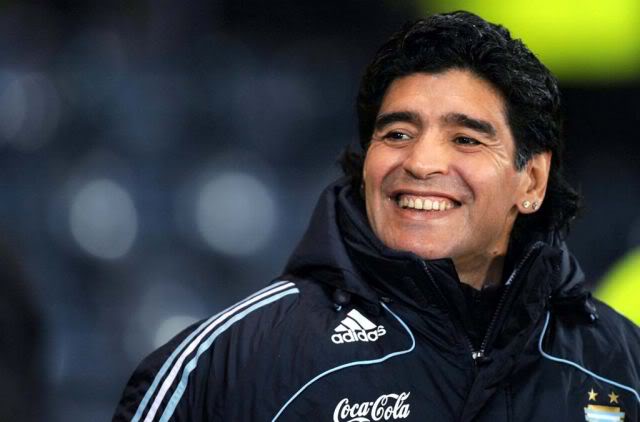