Dale Earnhardt Jr. passed Brad Keselowski for the lead with just five laps to go and then held off Keselowski at the finish to snare the victory at Pocono.

Brad was leading late in Sunday’s race at Pocono. He had no one in front of him and Dale Earnhardt Jr. behind him. There weren’t going to be many, if any, opportunites to get behind another car to get the airflow off the front of his car and the piece of trash to fall off.

Keselowski dominated most of this race by leading 95 of 160 laps, but he experienced overheating issues in the closing laps when a piece of trash got stuck on his front grille. The loss of momentum for Keselowski allowed Earnhardt to chase him down and then eventually make the winning pass.

Earnhardt felt bad for Keselowski, but felt pretty good about winning his first race at Pocono in 29 tries and winning for the second time this season, the first time he has won more than once.

After having lost some races because of strange circumstances, Earnhardt was happy to have one go his way.

“Well, he knew I wasn’t going to [help him get the paper off his grille],” Earnhardt said in a Victory Lane interview on TV. “I mean, I got to try to win the race. We had a little temperature on our car too at the end. I don’t know if we had something on the grille. Brad definitely had the better car and I am definitely owning up to that, but we won the race.

“We are definitely going to enjoy it. It goes into the books and helps us toward the Chase. We were there all day running great. We had a fast car, just never really got that track position until the end. You’ve got to be there and we were.

“Somebody had an issue, so we capitalized. I’m real proud of my team and especially [crew chief] Steve Letarte. This is his last year [with me]. I’ve never won here. I’ve never been here [in Victory Lane], this is amazing. I can mark this one off.”

“The car was real hot, we had a real fast Red’s Apple Ford and just got a big piece of debris on the grille and had to do something,” Keselowski said. “It was blowing up. Tried to make a move to get in behind (Patrick) and use the air to pull the debris off and when she went into the corner she got loose and I just chased her up there and lost too much momentum.”

“I should have just passed her but I had to do some kind of move. The car wasn’t going to make it. It was already starting to blow up and it was all I could do.”

Kurt Busch posted his first top-10 since his win at Martinsville nine races ago. He salvaged a rough day for Stewart-Haas Racing that saw fellow drivers Tony Stewart and Kevin Harvick drop from contention with various issues.

Stewart held the lead and was in great position late to win until he was busted for speeding on pit road and was dropped to 31st. Harvick was running second when had tire trouble. Stewart finished 13th, Harvick 14th, and Danica Patrick was 37th after she smacked the wall with 22 laps left 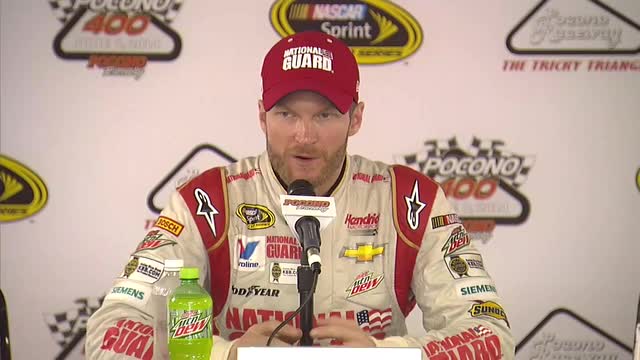