It took Dale Earnhardt Jr ten years to win his second Daytona; he finished second three of the last four Daytona’s. NASCAR’s most popular driver held off challengers Denny Hamlin and Brad Keselowski for the victory, the push from Jeff Gordon at the line gave him the boost he needed.

“Winning this race is the greatest feeling that you could feel in this Sport besides accepting the trophy for the championship” said Earnhardt.

The race ended on a late caution, after a wreck that involved a number of strong drivers, Carl Edwards ended up being the driver that took the main brunt of the crash.

The rain delay ended up taking over 6 hours to clear up before the drivers were safely able to go back out racing.

It started with light rain and ended up becoming a torrential downpour. During the rain delayed Fox Sports replayed last year’s Daytona 500 which ended up causing a major confusion among a number of race fans thinking that last year’s winner Jimmie Johnson had won this year’s race, they flocked to Twitter congratulating him on the win.

Engine problems hampered a few of the top name drivers the first one was Martin Truex Jr. who was the first driver to get eliminated from the Daytona 500,aswell as Tony Stewart and Clint Bowyer, both Stewart and Bowyer really never got out of the gate.

Wrecks on laps 145, 162, and 183 knocked out a number of strong Daytona contenders including Danica Patrick who ended up going into the concrete wall at 200 mph, Richard Petty driver Aric Amirola was also caught up in the wreck receiving heavy damage.

With Earnhardt’s Daytona victory he automatically receives a spot in the Chase, which should make the victory all the sweeter. 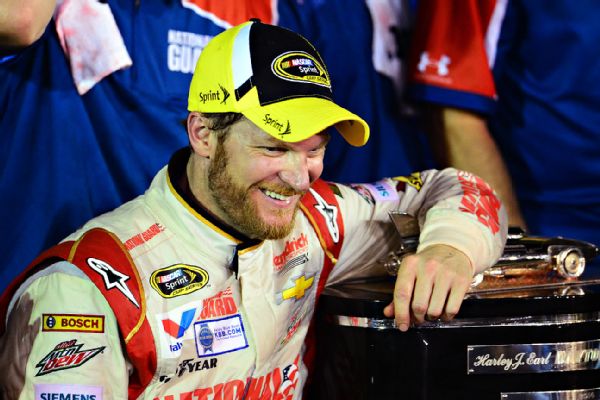