It’s Wednesday, August 29. The time is 11:45 AM. The Washington Mystics have just arrived from Atlanta and Elena Delle Donne already knows where she’s headed. She’s headed to receive an MRI after falling badly on her knee just last night. Mystics trainers don’t know what to expect, a tear? Maybe an MCL or ACL? Luckily, everyone was able to breathe. Delle Donne had said that she was scared, wondering if her season was actually over. When it came back better than expected, everyone was allowed to stop worrying.

“That MRI enabled me to breathe,” Delle Donne said.

She ended up having a bone bruise, a huge sigh of relief compared to what it could’ve been. Delle Donne texted the team group chat that she was OK and ended up texting Mystics guard Natasha Cloud individually as well.

“For me at this point it wasn’t about, ‘Shit we just lost a franchise player,’” Cloud said. “It was, ‘Shit this is someone I truly care about and this is her health at risk.’”

Greeted by her wife Amanda and her huge Great Dane Wrigley, Delle Donne was smiling with better news than expected.

But with less than 48 hours until Game 3, she had her work cut out for her if she wanted to play. Washington sports fans remember Nationals star Bryce Harper missing 42 games in 2017 with a bone bruise. Delle Donne had mere days.

Elena Delle Donne’s knee was badly swollen, she was in pain and not quite 100 percent.  She didn’t practice Thursday, and though her mind was set on returning for Friday night’s game, ultimately she was ruled out and the Mystics lost, 81-76. Another loss on Sunday would’ve ended the Mystics’ season.

I knew if she could walk, she was going to play,” Kristi Toliver, Elena Delle Donne’s all-star teammate, said.

However, it wasn’t easy. Even getting Delle Donne to walk took a large amount of recovery methods. The day before Game 4, Delle Donne had went through a laundry list of rehab activities that helped kill off an entire morning. According to a member of the Mystics training staff, it included.

Saturday evening was somewhat a calm one for Elena Delle Donne. Although she was still badly injured, Delle Donne’s wife, agent, and father joined her at Chart House, one of her favorite restaurants, on the water in Annapolis, Maryland. However, just because Delle Donne wasn’t with the Mystics didn’t mean that she wasn’t going to stop trying her best to recover. When Delle Donne talked about what she did that night, she mentioned that it wasn’t anything serious.

“Just tried to find a way to get in as much recovery as I could in a small amount of time,” Delle Donne said. “Ice, a lot of laying around and elevating. Staying off of it so the bones can recover and I was ready to go.”

Still, Delle Donne’s status for Game 4 on Sunday morning was unclear. Mystics coach Mike Thibault had the team practice the day before as if Delle Donne couldn’t play. He didn’t know she’d be good to go until after she’d ran, worked out, and gone through her normal shooting routine that morning.

“It was a nice present to see her in a uniform ready to go,” Thibault said.

Elena Delle Donne returned in a knee brace and showed exactly what the Mystics were missing from Game 4. While she wasn’t running the same or attacking the basket as usual, Delle Donne made her presence known by scoring 15 points and grabbing 10 rebounds in a blowout Mystics win, making 3-of-5 shots from three-point range and lighting the Charles E. Smith Center on fire with her late-game pull-ups.

Even when she wasn’t in sync, her presence alone forced Atlanta’s defense to overthink and allow players such as Kristi Toliver. Natasha Cloud and rookie Ariel Atkins wide open for three-pointers. The Mystics backcourt trio shot 19-38 in Game 4 compared to 8-27 in Game 2 as well as 10-32 in Game 3.

After the victory, it was much of the same for Washington’s MVP: Immediate icing after the game, stretching, and rehab workouts knowing that just because she played and the Mystics won didn’t mean that she could skip rehab workouts. When Elena Delle Donne was asked about the difficulty of the entire workout process, she just shook her head.

“I don’t know if anyone could’ve predicted that I would’ve been back as quick as I was. I was lucky that I didn’t tear any ligament or anything like that. I’m just very fortunate that I have a very good group around me that’s always trying to do whatever’s best for me. This has to have been one of the hardest things I have ever done,” Delle Donne said.

Two days later, she and her team were polishing off an 86-81 Game 5 victory to lead the Mystics to the WNBA Finals against the Seattle Storm. Who knows what will happen next? The Mystics are currently trailing the Storm 2-0 but they were very unlucky thanks to Sue Bird and her excellent defense as well as an unclear foul labeled as the ‘Good ol’ Sue Bird Move.’ All we know is that whatever the Mystics do in the coming games, Elena Delle Donne will be a huge part of what they do on the court. 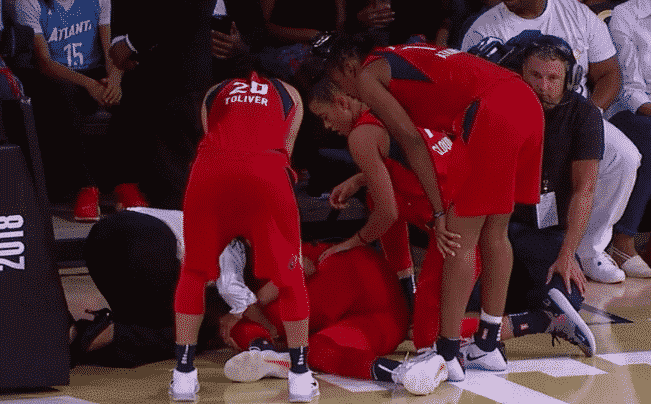