Each year, all of the writers and talking heads out there tries to predict what will happen during the upcoming season. Sometimes they will nail their picks and then other times they will look like they had no clue.

It’s all a game of chance but it’s fun to see if you can be that guy to predict everything and then brag to your buddies. I’m going to take my stab at it and see if I can manage to nail at least a couple of these picks.

I’m going to list two runner-ups for each award and then give my prediction on who will take home the hardware.

Rookie of the Year

Wiggins was in the perfect situation when he was selected by the Cleveland Cavaliers back in June. As soon as LeBron signed on to play for the Cavs, it took the spotlight off of him. All he had to do was fit in with a championship contending team. Then came the Kevin Love trade.

Now he has the weight of the Minnesota Timberwolves on his shoulders. It is good that he has Kevin Martin to play with. It will take some of the scoring burden off of him. I don’t think he’s ready for the leading scorer role yet. He should pick up easy points on the fast break and play good defense. I expect to see him on SportsCenter’s Top Ten a few times.

If nothing else, Payton wins the award for the best look. He has an awesome haircut, or lack of one. He will be running the point for the Magic from day one. He has a nice running mate in the backcourt in Victor Oladipo and a nice, athletic forward in Aaron Gordon. I expect to see some big-time alley-oops from the Payton-Gordon combo. He will play some solid defense and become a fan favorite quickly.

Jabari is going to be the man in Milwaukee this season. He was the most pro-ready prospect in the draft this season and should put up 18-20 PPG, as well as his fair share of rebounds. He will have some tough times ahead, like any rookie does, but will look like a seasoned vet more times than not. Jabari should have a long, successful career and be a multiple time All-Star.

Adams has a style of play that seems to get under every opposing player’s skin. Oklahoma fans love him though. Last season he averaged only 3.3 PPG and 4.1 RPG in 14.8 MPG. He should see a big increase in playing time. I would be willing to bet that he ends up their starting center by December 1st. If it weren’t for him playing with so many scorers, I might have him winning this award. I could see him averaging 15 & 9 this year.

Last season Sully started 44 of the 74 games he played in. He averaged 13.3 PPG and 8.8 RPG in 27.6 MPG in those games. This season he is the unquestioned starter at power forward. Boston needs some scoring from somewhere and I think Sullinger may get close to that 20 PPG mark. He has soft touch around the rim and he can step out beyond the arc. This should be a big year for him.

While I think the Utah Jazz will struggle as a team, I can see Burke putting up some big numbers individually. He averaged 12.8 PPG, 5.7 APG, 3.0 RPG and 1.9 TOPG last season.

He has a couple of good shooters next to him in Alec Burks and Gordon Hayward, plus a couple promising big men down low (Enes Kanter and Derrick Favors). He should be able to rack up a few assists and he keeps his turnovers down. He will be Utah’s second option after Hayward and I wouldn’t be surprised to see an 18 PPG, 8 APG, 4 RPG stat line from him.

Sixth Man of the Year

You can’t mention the Sixth Man award without mention 2-time winner Jamal Crawford (2010 & 2014). Crawford is always a spark plug off the bench, providing instant offense. He can fill it up faster than a gas station attendant. He averaged 18.6 PPG last year in mainly a reserve role. I don’t expect that to really change this season. Unless he gets injured, expect Crawford to get his.

I considered putting Hardaway Jr. on my list of runner-ups for Most Improved Player. Over the course of his rookie year in 2013-14, he averaged 10.2 PPG off the bench for the Knicks. He is coming into this season with his confidence high and a new dedication to defense. I think he received a little bit of that swagger from his pops. He will be a valuable reserve and I wouldn’t be surprised if he actually ends up starting over JR Smith at some point.

Thomas was DeMarcus Cousins running-mate in Sacramento last year. Relying on his speed, he averaged 20.3 PPG and 6.3 APG. When Phoenix came calling in free agency, he decided to make the jump to Arizona. Now he’s the third guard in a rotation with Goran Dragic and Eric Bledsoe. I think he will be a bolt of lightning coming off the pine and he will still manage to put together some big stats with this run n’ gun squad.

Coach of the Year

The buzz is back! Last year’s Bobcats finally got to the postseason behind Al Jefferson and Kemba Walker. This offseason they decided to rebrand and also acquired Lance Stephenson from the Pacers. After the changes, I believe this team will make the next step and finish as a top four seed in the East. Clifford’s name will be in the discussion considering the turnaround they’ve had.

Portland made a jump last season from the lottery to the playoffs. They even won their first playoff series in 14 years thanks to some huge games from LaMarcus Aldridge and a historic game winning shot in Game 6 courtesy of Damian Lillard. Portland has a chance to continue that success and win the Northwest Division this year. Terry Stotts runs a free wheeling offense with an emphasis on three-pointers. Portland has the shooters.

Stan Van Gundy has always been an underrated coach in my opinion. Even back in his days with the Miami Heat. If anybody can get Detroit to play the right way, Van Gundy is the man. He made a trip to the Finals with a rebounding/defensive center from when he coached Dwight Howard. Now he has the best center prospect in the NBA with Andre Drummond. Josh Smith can fill up the box score when he’s playing within the offense and Brandon Jennings is capable of big scoring nights. Greg Monroe is a big man I like because of his passing. This team will be in the playoffs thanks to SVG.

Steph Curry is the best pure shooter in the NBA today. Last year stats were 24.0 PPG, 8.5 APG and 4.3 RPG. He shot 47% from the field and 42% from three last season. There is no one like Curry when his shot is falling. Every season he continues to get better and that shouldn’t change yet (he is only 26 years old). Steve Kerr knows all about three-point shooting and he will know where his bread is buttered.

This kid continues to improve at an alarming rate. Five years ago he was an unknown guard playing in Chicago and now he is as tall as the Windy City’s Sears Tower and maybe the best big man in the NBA. He is a tall, lanky forward with the biggest defensive presence you can find in the league. Last season, in his sophomore campaign, he put up 20.8 PPG, 10.0 RPG, 2.8 BPG and 1.3 SPG. Expect those numbers to increase across the board. Fear the brow!

After four years in Miami, LeBron James found his way home. He must have skin as thick as a rhinoceros after putting up with the criticism he received in South Beach. Now he has two rings and he is still the king. Shrewdly, he upgraded his situation this offseason. He gets to play with one of the league’s best rebounders in Kevin Love and a young All-Star point guard in Kyrie Irving. A couple of old teammates with shooting ability followed (James Jones and Mike Miller). I’m sure by the time the All-Star Break is here, Ray Allen will be looking for a pen to sign a contract. Expect the typical 28/7/7 season from LeBron, which will be enough for MVP now that Kevin Durant is going to miss the first chunk of the season.

This was probably the hardest pick I had to make out of all these. The Portland Trailblazers, Oklahoma City Thunder, Los Angeles Clippers, San Antonio Spurs and Golden State Warriors were the teams I considered.

The Spurs are the easy pick. Go look at all of the other prediction articles. Probably 75% of them are picking San Antonio. I know the argument that they are old seems to be outdated since they prove everyone wrong year in-year out. If you really think about it, how many teams have made three straight Finals appearances? Not very many. It takes a lot out of the players to go to three consecutive Finals. I am canceling them out.

Until Chris Paul proves me otherwise, I am not choosing him to go to the Finals. He has never made it out of the second round.

Golden State and Portland are similar. They both rely on the outside shot to win games. If either gets hot, they can make a real run. I chose Portland over the Golden State because the Blazers have one of the best starting lineups one through five in the league (Damian Lillard, Wesley Matthews, Nicolas Batum, LaMarcus Aldridge and Robin Lopez).

The only knock against the Blazers is their bench, however, it should be much improved. CJ McCollum, Thomas Robinson and Meyers Leonard are all former lottery picks. They have also added Steve Blake and Chris Kaman.

I chose the Thunder because they are proven winners (2011 Western Conference Champions) and Kevin Durant is one of the two best players in the league. As long as he heals up, I expect them to make a push. Steven Adams will make his mark in the lineup and give the Thunder something they didn’t have with Kendrick Perkins; two athletic bigs. In the end experience wins out in a Northwest Division matchup.

This pick was much easier to make. I considered Cleveland, Washington, Chicago Bulls and Miami Heat.

I can’t trust Chicago to make a playoff run right now, not until I see Derrick Rose play an entire season. I hope he comes back and is close to the same player but seeing is believing.

The Heat just aren’t deep enough. I believe that’s one of the reasons that LeBron chose to leave. He could see the writing on the wall in Miami. Luol Deng and Josh McRoberts are nice pickups but that’s not enough.

I am a big fan of John Wall and Bradley Beal. I think they will be one of the best backcourts in the NBA for the next ten years. Washington also has proven winner Paul Pierce. He may not be the same player he once was, but he will provide some leadership. Marcin Gortat and Nene are two valuable posts.

Cleveland is clearly stacked. It would really shock me if this team doesn’t end up in the Finals. It should be 5 straight trips for LeBron James.

Everyone gets to watch a rematch of 2011 between LeBron James and Kevin Durant. This series would have major star power and would be entertaining. It would also have to better than last years considering how underwhelming that series was. Cleveland wins it all and Durant’s quest for a ring continues. 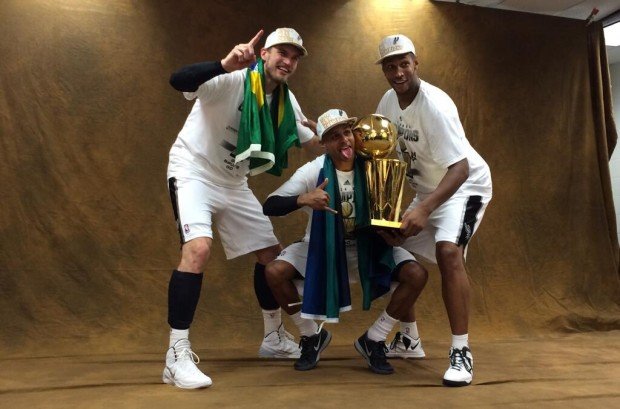