England emerged 32-26 over Samoa in an electric opening clash of the Rugby League Four Nations double-header at Suncorp Stadium, Brisbane.

The Lions were shaken early by Toa Samoa, who greeted the Pommy lads with some ferocious hits, led by the Frank Pritchard.

Fired up from performing the Pre-match ‘Manu Siva Tau’, a traditional Samoan war dance, the dark blue jersey’s rolled up the field like a breaking wave over a wilting beach, but they were unable to capitalise on field possession.

After 6 errors in twenty minutes, England finally found some rhythm through Gareth Widdop’s clear head, and no sooner had Daryl Clark come onto the field before he pounced on some lazy ruck defence and made a break, then passed it off to Kallum Watkin’s for England’s first try.

A Widdop conversion and a kick out on the full saw the Lions poised to lay on another, but a dropped ball let Samoa off the hook, who on the back of a penalty saw Isaac Liu crash over through the sticks to draw level.

While England held the technical upper hand, Samoa were filled with fire. With fast offloads and quick passes, Samoa were again inside England’s twenty when the monstrous centres Joseph Leilua and Daniel Vidot combined to put Samoa ahead 10 – 6.

Sam Tomkins and Matt Smith teamed up with some fast hands down the other end of the field shortly and Watkins bagged a double, giving England the lead again.

Another awful restart gave the Lions more possession in Samoa’s half, but they were able to hold out the English, nearly snapping Clark in half in the process. Widdop slotted 2 points from in front and went to the break 14 – 10.

Despite dominating up the front, Samoa were lacking discipline to hold onto the ball, and England made them pay through a Liam Farrell, courtesy from a Josh Charnley line break.

Pita Godinet delivered off the bench with a beautiful dummy right on England’s try line, and then again not long after to put Samoa in the lead at 22 – 20.

The English fans were despondent, but not for long, as Sam Tomkins demonstrated why he is beloved by them, scoring twice off two fumbled bombs from Michael Shenton and Tim Simona. Shenton’s fumble was ruled to have gone backward.

At 22- 32 with ten minutes remaining in the match, powerhouse forwards Pritchard and Josh McGuire leaped on a spilt ball and found Antonio Winterstein on the wing.

Ben Roberts missed the follow-up conversion but Samoa had England on the ropes. Hoping to close out the match, England went for a field goal but missed. Samoa poked and prodded down every corridor, forcing their way down the field, but ultimately ran out of plays, and out of time. 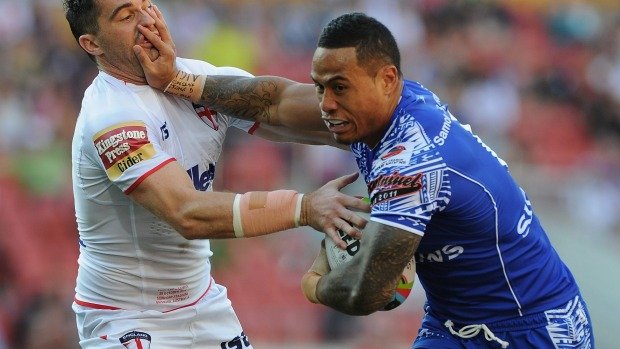