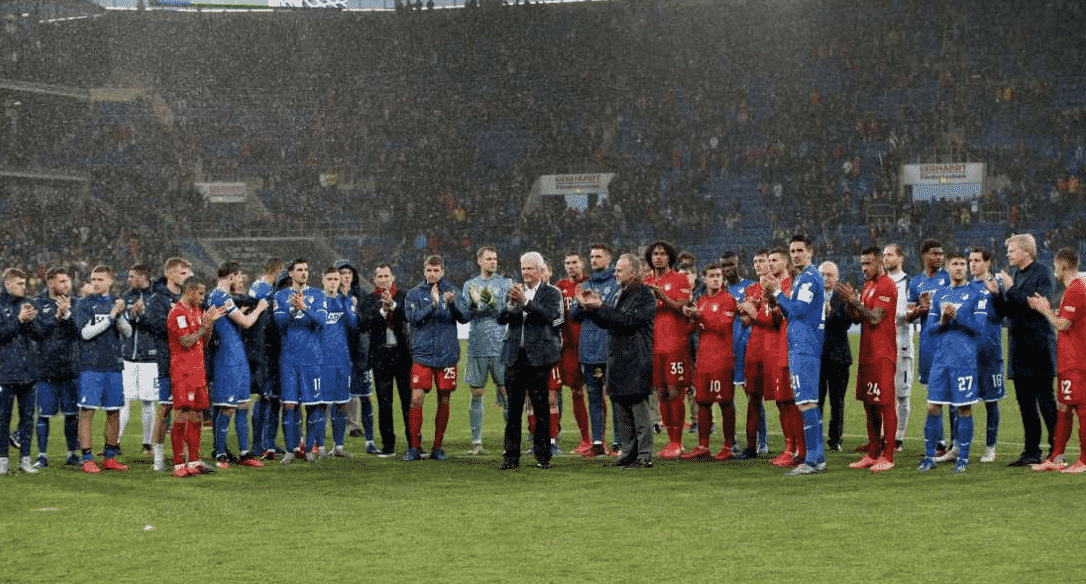 As part of a weekly column, World In Sport will focus on the key story of the weekend’s action of European football and recap the main results in Serie A, the German Bundesliga, La Liga and Ligue 1.

The match was suspended for 20 minutes before it eventually finished in farcial circumstances with both sets of players passing the ball between them for the final 13 minutes after an offensive banner in the visiting end directed towards Hoffenheim owner Dietmar Hopp was produced.

At full-time  79-year-old Hopp, Bayern chief executive Karl-Heinz Rummenigge and the players stood on the pitch and applauded Hoffenheim fans in a show of solidarity.

Hopp is seen as a divisive figure in Germany after bankrolling his home-town team from the fifth tier to the Champions League as it is seen to be against the traditional values of league ownership.

In a league where a “50+1” rule dictates that fan members must own a majority of shares in a club, Hopp is vilified for earning a special exemption from the rule that grants him permission for a majority stake.

He benefited from a loophole that allows any party that has been significantly investing in a club for 20 years to gain a majority stake.

Borussia Dortmund fans also took to exception to Hopp in their visit to the Rhein-Neckar-Arena in 2017 and have now been banned from away games there for the next two years.

Fortuna Dusseldorf had an eventful week as they contrived to throw away a three-goal half-time lead at home to Hertha Berlin to draw 3-3. Worse was to come in the German DFB Cup when they were humbled by fourth division side Saarbrucken 7-6 on penalties following a 1-1 in norma time where they also missed a penalty.

Bayern increased their lead at the top to two points after the Hoffenheim win with Leipzig being held at home by Mönchengladbach.

Meetings over the past few days have reached a conclusion that all games in Italy will be played behind closed doors until April 3.

It was a already a reduced round of fixtures in Italy for the third weekend in a row due to the Coronavirus outbreak. Only four matches were played but they saw Lazio sit top of the table for the first time in ten years after a 2-0 win over Bologna, extending their unbeaten run to 21 Serie A games. They are two points ahead of Juventus and three from Inter after the match between the two challengers was postponed.

The Biancocelesti have scored two or more goals on 19 occasions and boast the league’s top-scorer Ciro Immobile (27) and top-assister Luis Alberto (11).

Inter also have a game against Sampdoria to play and the re-scheduling of games puts the league in a difficult position due to Conte and Sarri’s team both still in Coppa Italia and European competition meaning they may not have a free week until after the season.

Atalanta thumped Leece 7-2, the fifth time they have scored five or more goals in a match this season. Gian Piero Gasperini’s free-scoring side have netted 77 times in just 25 league games and sit fourth.

The destination of the title could have changed again with Real Madrid regaining top spot after a comfortable 2-0 win over Barcelona in El Clasico.

Vinicius, at 19-years-old, became the youngest scorer in this fixture since Lionel Messi in 2007 with Mariano sealing the win in injury-time as they went two points clear with 12 games left.

Getafe secured an important 1-0 win at Mallorca which had implications at both ends of the table. It meant they moved into the final Champions League spot ahead of Atletico Madrid who drew at bottom of the league Espanyol.

Mallorca remain in the relegation zone and have seen Eibar pull  five points away from them after an impressive 3-0 victory against Levante.

Pitiful Toulouse lost again, this time 2-0 at home to Rennes as they look to set an unwanted record of the lowest points total in a Ligue 1 season. They are currently on 13 points and have 11 games to avoid Lens record of 17 points in the 80s.

Leaders PSG eased to a 4-0 win over Dijon as they close in on their seventh title in eight seasons and also reached their sixth consecutive French Cup final with a 5-1 thrashing of Lyon, who they will face in the French League cup final.

The capital side, who have won the Cup four of the past five years (losing to Rennes last year) saw Kylian Mbappe back up his brace against Dijon with a hat-trick including a stunning solo effort from his own half.