The clash of the titans gets underway Tuesday as three-time winners Germany take on host nation Brazil, by far their most formidable opponent. Felipe Scolari’s men carry the weight of a nation upon their shoulders as they aim for the sixth title and become only the sixth nation to win on home soil.

In the other semi-final the Dutch square off against Argentina, lead by Lionel Messi, who aims to put his Maradona-like stamp on this World Cup.

The Argentines would like nothing more than to win the World Cup on Brazilian soil while the Dutch look to avenge their three finals losses.

German fans will be buoyed by the news that this World Cup’s unusual prognosticator, Nelly the elephant, has predicted a Germany win. In Brazil, practicing witch doctor Helio Sillman has purportedly cursed a top German player.

Black magic aside, who will advance to the final at the Maracana on July 13? Let’s take a closer look ahead at what to expect from these two encounters and predict the winners.

In Belo Horizonte, Brazil goes into Germany match minus the talismanic Neymar, whose back injury has ruled him out for the remainder of the World Cup.

The bigger loss may, however, be captain Thiago Silva whose needless interference on the Colombian keeper earned him a second yellow card. Strong in the tackle, agile, and an excellent man-marker, Silva has marshalled the Brazil defence with aplomb.

The Brazilian Football Federation has appealed Silva’s suspension. German fans would cry foul if the ban were overturned considering Germany, host nation in 2006, lost the services of midfield dynamo Thorsten Frings under similar circumstances in 2006, after a post-match melee with Argentina resulted in a one-game ban.

Silva’s place will be taken by Bayern Munich defender Dante who lacks the pace and steel of his compatriot.

Look for the Germans to harry Dante and get in behind him with Thomas Mueller and Mesut Ozil, both of whom have pace to exploit Dante.

Andre Schurrle is likely to come on as a second half substitute, as he has for most of the tournament, to provide a fast counter and spread the Brazil back line thin.

Will Brazil carry on the nasty tone they showed in the quarter-final against Colombia, in which they cut down James Rodriquez on half a dozen occasions without earning the wrath of the referee?

FIFA has come under criticism for showing too much favouritism towards the hosts.

There are whispers that the Spanish referee was instructed to leave the yellow cards in the dressing room.

This contributed to the overly physical contest which, at times, bordered on violent, which saw so many challenges go unpenalized and resulted in Neymar being carted off on a stretcher.

Look for referees of both semi-finals to book foul play early, as FIFA will want to avoid a repeat of the Colombia/Brazil match which resembled the brutish Holland/Spain final of 2010.

FIFA will protect its stars, Messi and Arjen Robben, for the semi-finals and allow them the platform to showcase their footballing magic.

Scolari’s men will have a more difficult time breaking down the Germans who looked ruthlessly efficient in seeing off the French. If the Germans score first, don’t be surprised to see an identical shutdown game employed with a three-man midfield looking to disturb passing lanes in the centre of the pitch.

With Mats Hummels inclusion at Per Mertesacker’s expense, all of a sudden, the German back line looks well-suited to withstand the speed and skill of a Brazil attack, which, on paper, doesn’t look as formidable as the French.

If Brazil goes on the score sheet first, a determined Germany will find their way back into the game. Wouldn’t it be sweet irony for the 36 year-old Miroslav Klose, a late second-half substitute, to score the equalizer, and, in turn, pencil himself in as the all-time World Cup goal scoring leader ahead of the great Ronaldo?

Hulk, Brazil’s best forward, provides the impetus for Brazil’s attack minus Neymar. The Germans will stunt Hulk’s long runs by closing him down fast not allowing him time and space in which to manoeuvre. The Germans will push a high defensive line clogging up midfield and pressuring Brazil’s front three, Hulk, Fred, and Oscar.

The latter two who have not provided this tournament as expected and have come under heavy criticism from fans and media. Having dealt with France’s strike force, the Germans will be able to handle Brazil.

The current rendition of Brazil is an ordinary side which lacks that star power, creativity, and skill to open up lines of attack and rack up goals. Ironically, Brazil will rely more on Teutonic qualities of brute strength and physical play to outmatch their opponents.

Fernandinho, Paulinho, and Luis Gustavo will try to stifle the German attack with physical play in the centre of the pitch. Germany is likely to employ Philip Lahm at right-back to bring width to their attack to circumvent a congested midfield.

Will Brazil crumble under the pressure? No. But a savy, self-disciplined Germany will go through, however, by a 2-1 scoreline at the end of 90 minutes, as Brazil will be denied the scoring opportunities they were presented against Colombia and because foul play will be penalized in the name of FIFA’s favourite slogan, “fair play.”

Argentina looked clinical in finishing off the Belgians who never quite rose to the occasion in their quarter-final. Against the Dutch, the South Americans will meet with fierce resistance, as Holland will press forward for long spells and will not wilt if they fall behind.

The unflappable Dutch showed composure and determination in their comeback against Mexico after trailing for most of the second-half.

In the Costa Rica match, Louis Van Gaal’s men again showed poise after hitting the woodwork on three occasions and almost having been eliminated by a Costa Rican goal near the end of extra time. Nothing seems to unsettle the Dutch and neither will Argentina.

For many Arjen Robben has been the player of the tournament with his speed and dribbling mesmerizing opponents and leaving them in the dust.

Robben will go at Argentina in predictable fashion, hard down the right flank, often cutting inside to get off a shot with his left foot. Argentina will be wary of diverting too many defenders Robben’s way as this will leave ample space in the centre for Robin Van Persie and Wesley Sneijder.

With Van Persie as a dangerous target man up front and Sneijder’s hard right foot always a danger from distance, the Dutch will find a way to get on the scoreboard and send Messi home without the coveted silver ware.

Then there’s Van Gaal, the master tactician, always able to pull a rabbit out of the hat. His goalie substitution at the end of extra time was a stroke a genius which allowed the Netherlands to go through on penalties against Costa Rica.

Van Gaal will find a way to stifle Argentina attack. Most likely, he’ll have his men bottle of the midfield and mark Messi off the pitch. This will be a lot easier with Angel Di Maria ruled out for the remainder of the World Cup.

Without Di Maria, Argentina have lost their version of Arjen Robben, a player of tremendous speed and skill whose presence alone opens up space for his teammates.

Di Maria had a fine season for Real Madrid, was in peak form, and has a knack for getting on the end of a lot of Messi’s magic, his goal against Belgium being the prime example. Sergio Aguero lacks match fitness and won’t be able to make up for his teammate’s absence.

Will Lionel Messi work his magic? No. Van Gaal will find a way to nullify the games greatest player. Fans will hope that doesn’t mean that he gets the Neymar treatment, but rather, the Dutch find a legal means of minimizing Messi’s effectiveness.

The Dutch will close him down quickly and often in midfield, and they won’t hesitate to take two or three yellows to do so.

If Argentina fall behind, they will be exposed by a Dutch team which does well on the counter and even with Messi’s brilliance will fail to get back even in the match.

Against Belgium, their midfield looked tight and organized, only because the Belgium never offered a sustained attacking thrust and no one near as good as Robben lead the charge.

When the whistle blows, the Dutch will walk off the field 2-0 winners and leave us awaiting an all-European final. Discipline, steely determination, and a well-executed game plan will see the European sides through. 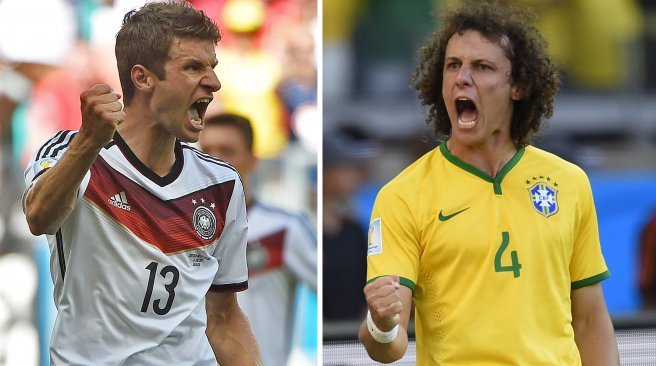