Neil Warnock’s Crystal Palace were 1-0 down to find themselves earn their first 3 points of the season with a 3-2 win over Everton at Goodison Park.

Everton asserted their dominance in the opening nine minutes with a goal from Toffee front man Romelu Lukaku, with assistance from Leon Osman’s great pass.

Palace paced themselves and got back into the game with a response through skipper Mike Jedinak’s spot kick after 30 minutes, when Everton’s shot stopper Tim Howard brought down James McCarthur in the 18 yard box.

Eagles’ pressure was piling, their Yannick Bolasie fired a shot which rattled the crossbar not long after the beginning of the second half. This pressure paid off as Howard mis-timed a cross which was whipped in by Martin Kelly; allowing Frazier Campbell to header the ball into the net from close range, to make it 2-1 Palace after 54 minutes.

Everton’s poor defensive start to the season was made worse after Yannick Bolasie scored the third goal of the afternoon for the Eagles, his first goal for them this season. Leighton Baines reduced the deficit on the 83rd minute from his trademark penalty kick, after Palace centre half Scott Dann brought down Leon Osman.

The Eagles’ keeper Julian Speroni was on fine form Sunday afternoon; pulling off a series of saves as they look to hold on to their first win of the 2014/15 campaign. When the final whistle came, Everton’s spark from Thursday’s Europa League game against Wolfsburg seemed to go out; leaving Everton on five points after 5 league games; averaging a point a game.

This game saw Everton hand newly signed striker Samuel Eto’o his first start for the club and from the off Eto’o put Palace under the cosh with a shot hitting the side netting.

Martinez’s view on the game:

“The penalty was an incredible reward for Palace and from then on the mental change allowed Palace to have a lot of belief and to change the game.

“It was very uncharacteristic of us to concede three goals with three errors, but even then the character was incredible and we almost managed to get something out of the game.”

This puts Everton 14th in the table after 5 games with 5 points. They will look to be turning the tables on Tuesday as they take on Swansea City in the Capital One Cup third round at the Liberty Stadium. 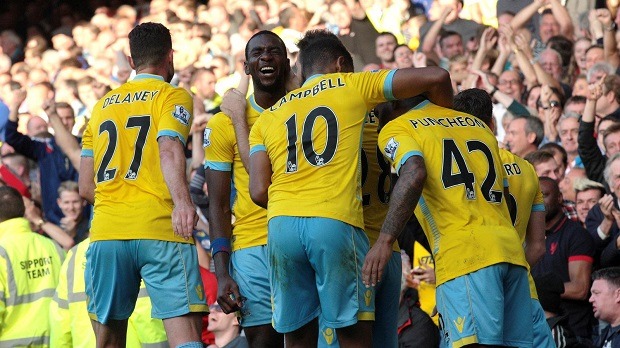