Belgian winger, Kevin Mirallas put the Toffees ahead a few minutes before half time in what seemed to be a good first half performance by Everton. That goal put them on course for a fourth place spot, ahead of rivals Liverpool. After a battling display by the Baggies, West Brom punished the below par Everton side with a superb header by Diego Lugano, just fifteen minutes to go.

West Brom boss Pepe Mel would be more than satisfied with what appears to be a great point against high-flying Everton. Everton on the other hand, will be disappointed that they didn’t take their chances and not to get the three points.

After being in the media for the wrong reasons, West Brom striker Nicolas Anelka was in the starting XI for the Baggies, not long after the shirt sponsor Zoopla decided to pull out on the sponsorship deal after the French man performed an Anti-Semitic gesture after scoring against West Ham back in December.

Mel, will not only praise the point that the Baggies obtained on Monday night, but the determination and the desire that they shown in order to get themselves back in the game after going 1-0 down before half-time.

Martinez’s side saw Ross Barkley sitting out this game after fracturing his toe against Queen’s Park Rangers two weeks ago in an FA Cup tie. Everton also missed the spark that the teenager had which may have cost them the points that they lost which now sees them sixth in the table; still in the hunt for a Champions League spot.

Former West Bromwich Albion loanee Romelu Lukaku was given a great reception by the Baggies supporters after serving at The Hawthorns last season; scoring 19 goals.

Everton had to re-shuffle the squad slightly after South African winger Steven Pienaar is suffering an injury, which meant bright star Bryan Oviedo played a role on the right wing. He seemed to cement himself there, making himself known as he narrowly missed the target on two occasions while Everton mounted pressure.

Last night’s game saw the debut of new Everton winger Aiden McGeady, who replaced Oviedo late on in the game.

Irish full-back Seamus Coleman is now another injury concern for Roberto Martinez as the full-back went off with a suspected hamstring injury.

Everton thought the game was won when Distin deflected Gareth Barry’s shot in what was the final kick of the game, but the goal was rightly ruled out after Distin being called for offside. 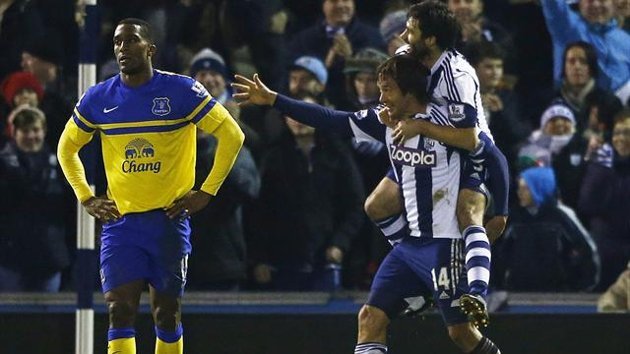