December has arrived and we have a good understanding of what teams will be contending and which teams are bottom-feeders. This is going to be a tough year out West. There are thirteen teams that can contend. The East isn’t as strong but it will be fun to watch. The best part of the season so far? The Los Angeles Lakers. It is great seeing such a powerhouse struggling to gain respect. Enough about my fanaticism, I have some new topics to think about.

The Streak Is Over

STOP THE PRESSES! After 17 straight losses, the Philadelphia 76ers have finally won a game. The other day I went outside to see if there were locusts, frogs or any signs of the black plague but I didn’t find anything. Thankfully the apocalypse isn’t here.

The win came against a lowly Timberwolves team that has half of its roster in the Intensive Care Unit right now but it still counts as a win. It was just in the nick of time. Had the Wolves managed to beat them, they would have tied the 2009-10 New Jersey Nets with the worst start in history.

They ended up losing to Oklahoma City the following night so the record would have surely been broken. Even weirder yet, they won in Detroit on Saturday night (that’s a real bad sign for the Pistons) giving them two wins for the season so far.

Is this a sign of things to come? Probably not. Outside of Michael Carter-Williams, KJ McDaniels, Tony Wroten and Nerlens Noel, this team looks like the NBA D-League All-Stars. They will still struggle to win 10 games this year. At least they’re on a hot streak right now. Let the good times roll in the City of Brotherly Love.

I’m glad this isn’t an Olympic year. For some reason the Gasol Brothers (Pau and Marc) look near unstoppable.

Marc Gasol has been at the top of nearly everyone’s MVP rankings so far this season. The Grizzlies Grit ‘n Grind style of play has led them to a 15-4 record. Marc Gasol is the guy the defense revolves around. He is a former Defensive Player of the Year (2012-13) so that part of his game is no surprise. He has become a much more well-rounded player this season. He is averaging 19.8 PPG and 8.9 RPG. He is a career 13.7 PPG scorer coming into the season. That scoring increase is why people are pointing to him as potential MVP. I’m not convinced he can be a MVP, but I know he will be an All-Star.

Pau Gasol is the more remarkable story in my opinion. He was blasted for the past 3-4 years in Los Angeles. No matter what he did, it was never enough. He was constantly in trade rumors the entire time he played for the Lakers. I’m sure he kept a couple duffel bags sitting by his front door just in case.

Leaving LA for Chicago was the smartest move he ever made. He is back to playing at an All-Star level, averaging 20.1 PPG and 11.9 RPG. This is the first time he has averaged a double-double since 2011-12. More importantly, he is appreciated in Chicago and they’re winning games. He should call up Kobe Bryant and ask how things are going in LA.

It’s funny how you can have a team like the Knicks who have all the resources in the world and a superstar like Carmelo Anthony, but they can’t seem to get anything right. You can even add in a supposed basketball genius in Phil Jackson and it still doesn’t do shit for them (I know, it’s early). The fans in The Big Apple are dying for a winner and they’ll come out to watch their team even when they’re 15 games under .500.

Then on the flip side, you have a team like the Atlanta Hawks who always try to go as cheap as possible, have a racist GM (Danny Ferry) and their fans couldn’t care less until playoff time yet they have been in the playoffs for eight consecutive years.

That’s sports for you. Atlanta is sitting pretty with the third seed at the moment (12-6). Somehow, year after year they lose players but still manage to find the right mix to compete. They are playing at a high level offensively behind Kyle Korver, Jeff Teague and Paul Milsap.

They are top five in both field goal percentage and three-point percentage. The Hawks are versatile and are the type of team that you have to play man-to-man defense on throughout a game or they will torch you. Atlanta will be a tough out come playoff team and they will probably continue to play in half-empty arenas until then as well.

Keep en eye on Dennis Schroder. The German sophomore has a bright future ahead of him. He won’t start unless something happens to Teague but at some point in the future, he will be a starter somewhere.

Return of The Bobcat

Coming into the season I had high expectations for the Charlotte Hornets. I thought Michael Jordan finally hired the right coach and had the right mix of young players to become a legitimate playoff team now and into the future. When they signed Lance Stephenson to a three-year deal, I thought it was a great move. He led the NBA in triple-doubles last season and was a big piece to the Pacers success. It’s very hard to come across a 24-year-old with his experience and ability in free agency.

This should be a playoff season for them, right? Think again, they are 5-15.

The Hornets look more like Bobcats at this point. They should trade the teal in for some blue and orange with pinstripes. Where’s Primoz Brezec? Is he available?

Lance Stephenson has been a major disappointment. The only major contribution he has made was hitting a game winner against Atlanta. His production has dipped across the board. He is shooting under 39% from the field after being a 49% scorer last season. He is pulling down 7.6 RPG which leads the team but that puts a spotlight on another one of Charlotte’s problems.

Where the hell has Al Jefferson been? He is a great low-post scorer, maybe the best in the league but he needs to pull those feet off the floor and clean the glass a little. The Hornets Bobcats are ranked 25th in offensive rebounding.

More than anything they need to trade for a shooter. They are lacking scoring from the perimeter. They are basically the opposite of the Atlanta Hawks at this point. Head Coach Steve Clifford runs such a slow pace because their offense is centered around Big Al. They play exclusively out of the half-court and they don’t have the players to create shots (except Kemba Walker). Until they change their philosophy and find some shooters, they will struggle.

Monta Ellis has been on fire the past two weeks. He has been a solid wingman for Dirk Nowitzki all season. He has put the team on his back a few team lately. During Tuesday’s game against the Bulls in Chicago, Monta sank two free throws at the end of regulation that sent the game into overtime. The game ended up going into double-OT where Ellis hit what ended up being the game winning three pointer. He ended up finishing with 38 points in that game.

The very next night the Mavericks traveled down the road to Milwaukee where they were in another tight game, this time with the Bucks. Rick Carlisle decided to sit Dirk Nowitzki so it was up to Ellis to lead the way. With the game tied at 105 and 8.9 seconds remaining, this is what happened…

Overall, Monta Ellis had three 30 point games since November 22nd and was responsible for two of the Mavericks five wins.

Cleveland will finish first in the Eastern Conference.

Oklahoma City will grab the eighth seed from Phoenix. 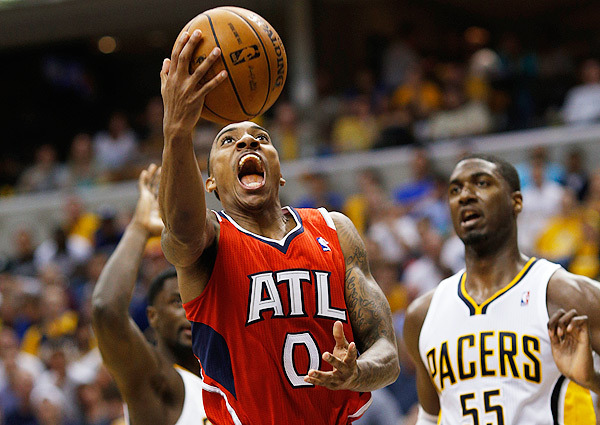