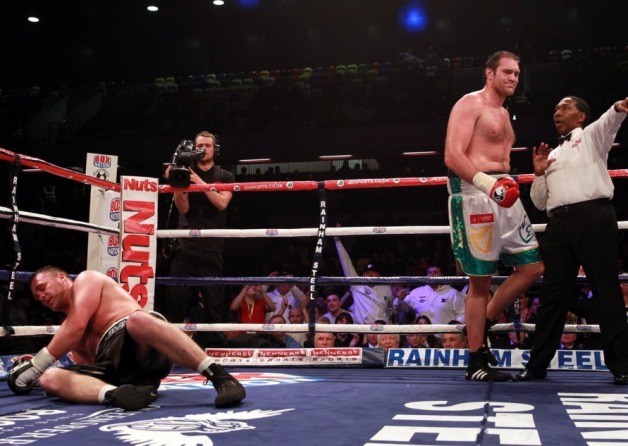 After watching last night’s boxing, Tyson Fury has a long way to go before he could be mentioned in the same breath as heavyweight champion Wladimir Klitschko. Tyson was fighting Joey Abell on the undercard of Dereck Chisora’s win against Kevin Johnson.

Fury looked out of shape and his conditioning was very poor, we know that he’s had two cancelled bouts against David Haye, he said he’s had a bad week with his wife being rushed to hospital and two of his cars burned out on his drive, but he looked nowhere near a potential heavyweight champion.

Fury stopped Joey Abell in the 4th round on Saturday night at the Copper Box Arena in London, UK, however when the American did let his punches go Fury looked uncomfortable and had to hold on to recover.

Abell hit Fury with some hard left hooks from time to time, with the way that Abell was getting success, Tyson looked miles away from getting a title shot.

Fury himself acknowledges that he needs to improve, he added; “I always show heart – I’ve got the heart of a lion

“I always entertain and put a show on. That’s what I do, at the end of the day I bring the fight to my opponent.

“But there will be no time off for me after this one because I’ve got a big year ahead of me. I’ve got some weight to lose and some tweaking up to do. I need to improve – there’s always room for improvement.

“I’m back in the ring in April and I can’t wait. I’ve got a good six months planned and hopefully at the end of that I will be in line to fight Wladimir Klitschko for the WBO championship of the world.

“I’m looking forward to it and I’ve been wanting it now for a while now. I’m the heir to the throne and I’m going to win because that’s what I am – I’m a winner.”

Fury’s manager and uncle Peter Fury insists he will be better condition when he returns to the ring in two months with potential rematch against Dereck Chisora.

He added; “Joey Abell was not a bad comeback opponent for Tyson after 10 months out, so on the whole we’re very happy with his performance,” he said.

“I said it would be a knockout and he’s done exactly what we expected of him. Tyson is happy to be back and he made short work of Abell.

“He’s still got to get his balance right, because he sometimes loses his footing, and his distance right and everything else, but he’s on with it and away we go.

“He’s going to be straight back in the gym and we’re going to get some quality sparring in for him. We never brought any in for this because Tyson is at a world level n

ow and this was just a fight to get him back going again.

“He’ll fight again in April and he’s got another 14lbs to shed between now and then. He’s only had five weeks in camp and he’s had a long lay-off.

“In April you’ll see a different fighter. The timing will be there, the footwork will be right and he’ll be in shape. You’ve got to remember this was a five-week Tyson Fury.”

One thought on “Fury dominates Abell in poor fight”