Things are really beginning to gear up for the World Cup. The event, just weeks away now, is the second time that Brazil has hosted the tournament. They didn’t win it back then, in 1950. In fact it was the Uruguay team that conquered all before it. Yet there is a buzz in homes and pubs up and down the country. The question that is being asked is who will win this time?

Many people think that it will probably be a South American team which wins the competition in a few weeks. However, that may not be quite the case.  A new game called Head to Head thinks it has predicted the winner.

According to data which has been collected and thoroughly analysed by Ladbrokes, it’s our old friends the Germans who are going to win this time. In fact, the company predicts that they will beat Argentina on penalties. Can you imagine – Germany versus Argentina? That may not get the viewing figures in the UK that the sports channels are hoping for, given our (ahem) history with the two nations.

However, that’s a by the by. The data has been turned in to a very well-designed tool which allows you to put two teams (out of those which have qualified – apologies to our Welsh and Scottish readers!) against each other. The tool then compares the results of the teams in all of their previous games and will forecast the score if and when the teams face each other in Brazil. You can find it here.

You don’t have to remember all the teams either – a drop down menu of maps allows you to chose which two teams to pit against each other. As some fun for soccer fans this can’t be beaten really. I wanted to see who would win out of the finalists from 2010 – so I entered Spain and the Netherlands (remember that Spain won 1-0 in that instance. These are the results that came in. 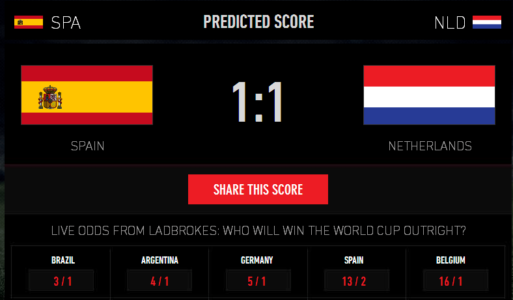 The factors that are used are many – how many games the teams have played in previous tournaments and how many wins they have had – as well as more human data such as how many hot heads they have (here, brought to us in terms of how many red cards each team has received).

Give the game a go – it’s great fun. If you are, by the way, wondering where England will come in all of this then according to the game they are, really, nowhere to be seen. According to the game the hosts will come third with Spain coming fourth. As for the three lions – perhaps they have a few tricks up their sleeves which the data guys have overlooked? Let’s hope so! 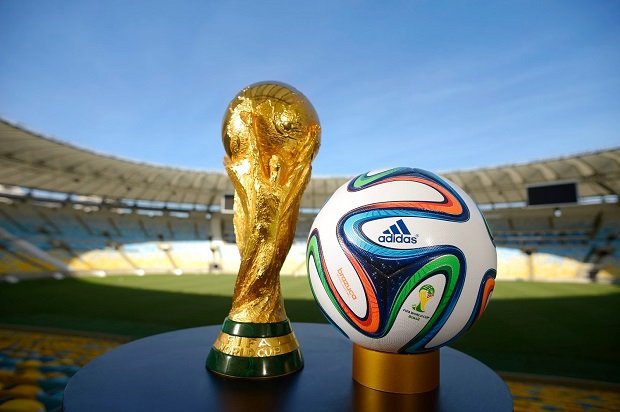