When we talk about the NBA, we always talk about the marquee stars and all their accolades from MVP’s All star game selection to scoring titles. But what about the guy next to the star players who made their jobs that much easier but never got the fan fair of the superstars of the NBA. Where talking about the League’s all-time sidekicks.

There must be criteria for a spot on the Robin all-stars named after Robin from Batman who is the best sidekick I’ve ever seen.

1. Must’ve been an all-star calibre talent with someone who at least made an all star team, but was teammate enough to defer to the better player on court.

2. Must be able to strike up the argument when mentioned that if you weren’t playing with whoever the star on your team was you could’ve led a team all on your own.

3. You have to be in no doubt about the second option meaning if your star was hurt, the offense ran through you it wasn’t done by committee and everyone knew you were plan B

So now that we’ve set the rules for the Robin all-stars let’s get started.

10. Pau Gasol comes in at ten, one of the most skilled power forwards of all time and the one guy who actually seemed to understand his counterpart in Kobe Bryant.  This seems to be one of the hardest things to do in league history.

Pau was second in command during the Lakers three most recent finals appearances and two championships.

Pau’s shining moment came in game 7 of the 2010 NBA finals when he scored 19 points while pulling down 18 rebounds to take home his second NBA championship.

09. John Stockton is the prototype for a point guard in the NBA selfless clutch and a leader, he played second fiddle to Karl Malone who is regarded as the best power forward in NBA history. Even while John was the 2nd option on his team he still has the accolades to compare with the best of them, John is the NBA’s all-time leading assist man with 15,806 and was the all-time leader in steals with 3,265 which is a testament to his unselfishness and his focus on defense.

08.Walt Clyde “The Glide” Frazier was a part of the last team to be bring a championship tooin  New York 1973, Clyde’s intensity on defense and his legendary mid-range jump shot made him the perfect sidekick for all-time great center Willis Reed.

While Reed was the Star on court, Clyde owned the City off the court with his flashy cars and clothes which has to stand for something. At the time of his retirement Clyde led the league in All-time steals in the playoffs which are even more impressive due to his short career.

07. David “The Admiral” Robinson was the Spurs franchise at one point and it wasn’t a bad thing in the least bit, he had every tool you want in a basketball player. He was one of the league’s most dominant center, Robinson always seemed over-matched in big games no matter who they played, so when the Spurs drafted Tim Duncan in 97-98. He  automatically took reigns of the franchise.

Robinson had to swallow his pride and hand over the franchise he led,  which is one of the hardest things to do in sports.

Robinson’s greatest individual performance came against the L.A Lakers when he scored 71 points and pulled down 14 rebounds,  his 71 points is the 7th most points scored in a single game in NBA history.

06. Shaquile O’Neal was the Alpha male for few teams in NBA history,  but when he went to Miami during the tail end of his prime he became the biggest sidekick in the NBA Next to Dwayne Wade. O’Neal still dominant and giving the Heat that low post presence they needed, Shaq played second fiddle to Wade as they led the Heat too there first ever championship.

05. Kevin McHale was the man next to Larry Bird during the glory years of the Celtics and their four championships of the 80’s. Bird is known as one of the greatest players in NBA history, but was known for growing impatient with McHale because he would say McHale could be the best player in the league if he just drove himself.

04. Dwayne Wade as we covered earlier was the king of Miami and he is still an unbelievable talent, easily a top 10 player of his generation but in the summer of 2010. He was joined by another amazing star.

Lebron James one of the only stars in the NBA who could’ve out-shined Dwayne, a lot of sportswriters were worried if the two stars could mesh. It took some time, but Wade gave up the dominance of the franchise. He helped bring its first championship to graciously.

The Heat is now the most dominant team that the league has seen since the Kobe and Shaq’s Lakers.

03. Kobe Bryant is one of the greatest players of all-time without debate he’s a five-time NBA championship, for the first three of those championships he wasn’t the leader of those teams.

He was Shaquille O’Neal super sidekick and throughout the early 2000’s was a part of the most dominant team in the NBA with the L.A Lakers, in which they won 3 straight NBA championships.

Even with the ball, dominant O’Neal was seen as the man in town. Kobe still averaged between 25 and 30 point while they were both Lakers.

One of Kobe’s most famous NBA moments came in his 81 point explosion against the Toronto Raptors in 2007.

02. Kareem Abdul Jabbar is regarded as the best center of all time with the credentials to match with six NBA championships and Six MVP’s; he is easily in the pantheon of NBA greats.

But in 1979-80 he handed over his Lakers team too Magic Johnson. Abdul Jabbar wasn’t as accepting as a Dwayne Wade or David Robinson, but Jabbar knew for the betterment of the franchise. He had allowed Magic to run the show, together Magic and Kareem won five championships.

Kareem played second banana to Magic, but he is number one in the NBA all-time in scoring with 38,387 points which should put things into perspective.

01. Scottie Pippen had the hardest job of all of these guys; the one thing that seemed almost impossible was meeting Michael Jordan’s expectations.  But Scottie stepped up to the plate while becoming the most dominant defensive force in the NBA, he’s job was too just shut down the others team best player. A lot of the guys who are the Batman’s add to the Robin’s on this list

Scottie shut them down and made Michael’s job that much easier, Scottie gets the nod on this super side kick list,  just because of being the number two to the best player’s of all-time and accepting his responsibilities and he was dominant with them.

The List is complete do you agree or disagree, do you feel someone was too high too low or even left off all together. 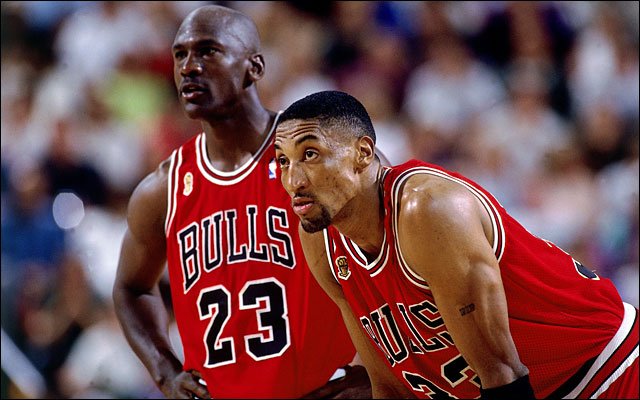