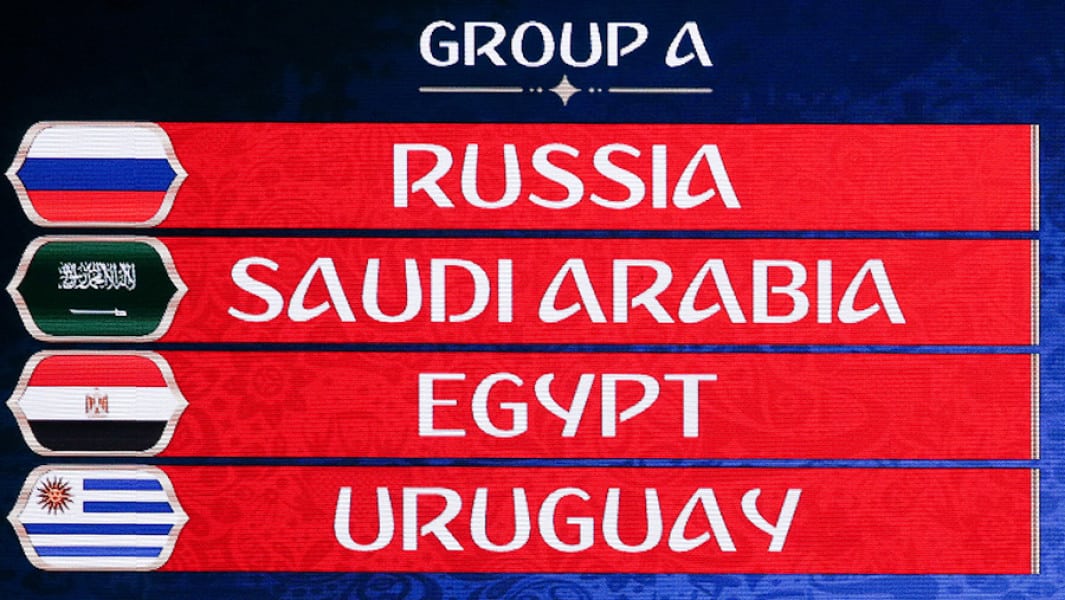 World in Sport highlights group A of the 2018 FIFA World Cup, as Russia plays host to the most recognized tournament on Earth.

The world’s beautiful game showcases its greatest spectacle in Russia, with the opening kickoff of the World Cup coming on June 14, 2018.

The host nation of Russia will enjoy all the splendors and celebration of opening day. The opening slot of group A is a designation given to all who are chosen by FIFA to host the event.

Let’s reveal the four teams that will be competing in group A, as well as the schedule.
**All times listed in local Russia, with the UTC and Eastern Time Zones included**

Group A (Top 2 Teams Advance to the Knockout Round)

Quick notes about the history of each team at the World Cup.

Russia will be competing in their 11th FIFA World Cup this year, their best result being a fourth place finish in 1966. These results are split between the Soviet Union (7 Apps) and Russia (4th App).

Saudi Arabia will be making their fifth FIFA World Cup appearance in 2018. They have advanced to the second round in only one of their four previous outings.

Egypt is only making their third appearance in the FIFA World Cup. They did not advance out of group stage in either the 1934 or 1990 editions of the tournament.

Uruguay has the deepest history of all teams playing in group A at the FIFA World Cup. This will be their 13th appearance at the event, having won the first and fourth editions of the tournament.

Uruguay Team Page
For the team roster and other highlights, check the Uruguay team page.

Let’s start with Uruguay, strictly out of respect for their history in the World Cup. Most fans and pundits consider Argentina and Brazil being the dominant force in South American football. Find your way to the Uruguay Team Page, and check the Copa America / South American Championship results. Include that with their World Cup history, and then recognize that Uruguay has been successful in this sport for years.

Uruguay is, in fact, the favorite to come out of group A, likely to advance to the knockout round.

Uruguay advanced to the World Cup, after finishing in second place through South American qualifying. They are one of five teams from South America competing at the 2018 FIFA World Cup.

La Celeste is led by a well-known superstar and Barcelona biter, or excuse me, striker, Luis Suarez.
Suarez has made 97 caps with the Uruguay National Team, and he is joined upfront with 100-cap teammate Edinson Cavani. The two have combined for 92 tallies in International play.

The back line has even more International experience, as captain Diego Godin has 115 caps to his credit. Godin just hoisted hardware recently, helping Atletico Madrid to the UEFA Europa League title.
Also among the defensive line is Godin’s teammate at Atletico, José María Giménez, who carries 41 appearances with him.

Maxi Pereira leads the club with 124 International caps, and in all, this is an experienced team that should be favored to take group A.

Russia and Uruguay meet in the final day of group A play, which could decide who takes the top two spots in the group. The winner of that match could secure a first-place finish to the knockout round.

Russia Team Page
For the team roster and other highlights, check the Russian team page.

As hosts, Russia did not compete in any of the qualification process. Arguably, that could hurt not having the experience of working your way there.

Russia does not have a ton of experience up front, as their leading goal scorer has amassed 12 goals in only 30 caps. Fyodor Smolov plays for Krasnodar of the Russian Premier League, and he will have to step up his game. Recent call-up Aleksandr Kokorin has also scored 12 goals for Russia, but he suffered a torn ACL in a recent Europa league contest, and will miss the tournament as a result.

Since Russia did not have any qualifying experience, they have relied on International Friendlies. Since their participation in the 2017 Confederations Cup last June, Russia has played six Friendlies to tune up for the World Cup. They also hosted that event, but their results were far from favourable.
One win over New Zealand and losses to Mexico and Portugal were all they were able to manage in the 2017 Confederations Cup.

Russia has only one win over South Korea to show for their six Friendly outings since the 2017 Confed Cup over the last year. They’ve been outscored 8 – 13 overall, but have two remaining Friendlies before the World Cup kicks off. Russia will play Austria in Innsbruck on May 30, and they will host Turkey on June 5 in their final Friendly, before hosting the World Cup’s opening match on June 14 against Saudi Arabia.

Home field advantage always has a way of lifting a team to another level, but this team might need a lot more than the crowd to get them to the knockout round. With Uruguay favored, the likely opponent that will give Russia the most problems will be Egypt.

Slowing down the likes of Mohamed Salah will be the task of team captain and goalkeeper Igor Akinfeev.
The Russian net minder clinched his 100th International cap, when he held New Zealand to a clean sheet in that mentioned Confed Cup 2 – 0 win.
Not only is he a member of the Lev Yashin Club, which is an honor given to Russian goalkeepers, but he is the leader of all members of the club. Even Lev Yashin himself comes in as fourth (203) on the list of Russian goalkeepers football career clean sheets. Akinfeev has earned 245 total clean sheets in his history for club and country, 44 of which have come with the National Team.

An injury to defender Ruslan Kambolov opened the door for the announcement that retired Sergei Ignashevich will be back for the 2018 World Cup. The 38-year-old has amassed 120 International caps, and he and Akinfeev have been together with CSKA Moscow of the Russian Premier League since 2004.

Russia will be strongly favoured to get all three points from Saudi Arabia in their opening match of the World Cup. Their second game against Egypt is where this group could become interesting.

Egypt has appeared in two World Cups, but the team has only played four overall matches. In 1934 when the second World Cup was played, only 16 competed in the tournament. There was no group stage, as they played what we recognize as a classic round-of-16 knockout round, sending eight teams home with only one match played.

Egypt’s other appearance came in the 1990 World Cup played in Italy. Egypt was in group F with England, The Republic of Ireland and The Netherlands. What transpired was one of the ugliest group stage finishes in World Cup history.
There were six matches that were played in group F in 1990, and there were five draws, and one win for England over Egypt that finished 1 – 0. There were a combined 7 goals scored in the entirety of group F play, which eventually sent England, Ireland and The Netherlands on to the next stage. Only Egypt was sent home from the group, and they scored one goal from the three contests.

Mohamed Salah is the most dangerous player in the World Cup, and he will give all three of Egypt’s opponents fits in group A play. After making quite an impression with AS Roma, Salah moved to Liverpool for the 2017/18 English Premier League campaign.

If you are wondering how his season went this year, you need not look further than the awards:

The Premier League campaign has ended, and all Salah did was break the all-time goal-scoring record, netting 32 balls in league play. Tune in for the Champions League final on May 26, to see if Liverpool can beat Real Madrid. Should Salah score in that final, it will only add to the 44 overall goals he has scored in all competition this year.

Naturally, the questions will be asked if there is enough around him to succeed on this grand stage.

Egypt took top spot in group E World Cup qualification out of the Confederation of African Football. They opened qualifying against Chad in the second round, and took a 4 – 1 aggregate two-legged win to advance to the group stage. Egypt scored eight and allowed four goals in group play, advancing in a case where only the five group winners qualify for the World Cup.

There are seven players on the final Egyptian World Cup roster that come out of the English Premier League. Al Ahly of the Egyptian Premier League also has a good bit of representation on the squad.

The midfielders that will aid Salah, will feature Abdallah Said and Mohamed Elneny, who have combined for 94 caps.

Overall, Egypt will be seen as the wildcard in this group. It could come down to tie-breaker scenarios between Russia and Egypt as to who moves on the knockout round.

Saudi Arabia has basically been given no chance to advance out of this group.

Saudi Arabia are listed as underdogs by the odds makers in all three of their group A encounters.

As you might have noticed at the beginning of the article, Saudi Arabia is listed at +3300 to win the group. That tells you that their odds of advancing are extremely slim, and it is hard to expect anything monumental to happen for the team this year.

Opening against the host Russia in the first match of the tournament lends further difficulty to the situation. The crowd factor being what it will be, no one in the Saudi locker room feels like they don’t belong here. Everyone has earned their way here, and Saudi Arabia took advantage of a nice qualifying schedule. Japan and Saudi Arabia finished 1 – 2 in the AFC group b World Cup qualifying, the two separated by a mere point for the top spot.

Mohammad Al-Sahlawi wears the #10 jersey, and all eyes will be on him in regards to finding the back of the opposing nets. He has been a constant double-digit goal scorer for his club, Al-Nassr of the Saudi Professional League, over his nine years there.

Saudi Arabia has 11 players over 30 on their World Cup roster, so if experience counts for anything, it could benefit them.

Uruguay wins group at -105, and takes the top spot of group A.

Egypt surprises everyone and steals the second position in group A to advance to the knockout stage.

Russia disappoints their home fans and comes in third place, out of the tournament much earlier than expected.

Saudi Arabia comes in fourth place, but does manage to get a result somewhere in group play.